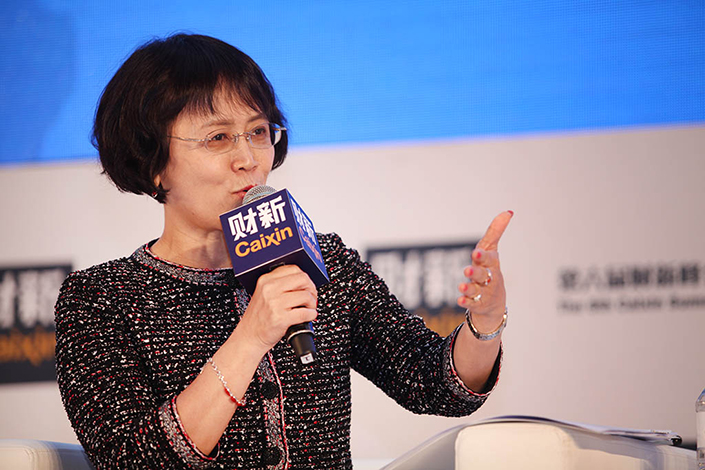 Caixin Media Editor-in-Chief Hu Shuli told a conference at the University of Oxford on Monday that China should continue embracing a market economy even though the concept has been challenged in the West this year. Above, Hu speaks at the 6th Caixin Summit in Beijing in November 2015. Photo: Chen Weixi/Caixin

Editor’s note: Hu Shuli, the editor-in-chief of Caixin Media, gave a speech Monday at the University of Oxford’s Blavatnik School of Government during the Challenges of Government Conference. The speech — one of four under the topic Bridging the Economic Gap: How Can We Fix Capitalism? — is below.

Good morning, dear friends. It’s a privilege and great honor to be here at Oxford.

When I think about China’s economic gap and corporate climate in a changed world, I like to see it in three dimensions — the short, the medium, and the long term.

First, the short term. China’s economy had a strong first quarter this year, with a robust GDP growth of 6.9%. But starting from April, one key indicator — the Caixin PMI, or Purchasing Managers’ Index — showed early signs of weakness. The trend was further established last month and this month. It’s a consensus now that China’s economy is slowing. The old engines of export and government spending are losing steam.

But China is not heading off a cliff. Underneath the cycles is a transition — a slow, sometimes painful, yet firm switch from the old economy to a new economy.

Behind the new economy are two key assumptions, which are pretty obvious today in China: The relative abundance of capital coupled with the reduced return rate, and the increased labor costs resulting from a turning point of labor surplus. A new balance of growth must be based on high human capital and high-tech. There is no other way around this.

Caixin’s fledgling think tank, called Caixin Insight, started to compile a new-economy index in 2016 to measure the strength of these new growth engines.

We have some very interesting findings. We found out that a third of China’s economy belongs to the new economy. Among the biggest contributors are information technology, financial and legal services, and high-end manufacturing.

What’s mostly interesting is our new economy index, or NEI, goes almost exactly against official growth economic indicators. When official growth indicators rise fast, the NEI drops. When these indicators slow down, the NEI rises. Our interpretation is, when the economy is in contraction, the main engine for industrial growth is high-end manufacturing, which is a main component of the NEI. And when the economy is in expansion, the engine switches back to traditional manufacturing. It shows that high-end manufacturing, or what we call new manufacturing, is more resilient, and countercyclical. That’s a vivid example of why we should foster the new economy while maintaining some of the old economy to make sure the growth is stable enough for the transition.

The dynamics between the old and new economy are fascinating. A new, market-oriented economy fosters entrepreneurship and disruptive innovation. That adds new power for future growth.

Despite the current slowdown and an ongoing switching of gears from the old to the new engine, the outlook for the Chinese economy is still quite stable in the near and medium term because the confidence level is actually rebounding, and the government’s combination of monetary policy and fiscal policy are still effective. But short-term stability can be deceiving. Long-term growth still has very serious challenges.

The fundamental solution is structural reforms based on principles of a market economy. Interestingly, that very formula that China has been following successfully for the last three decades, and that I firmly believe is the only right choice for China, has been challenged in the post-financial-crisis Western world.

In the U.S., President Donald Trump is obviously, at least rhetorically, anti-globalization and anti-free-trade.

Here in the U.K., where economic liberalism was fostered and dominant for decades, this fundamental philosophy is also challenged today, with Brexit and the policies heavily influenced by partisan politics.

Chinese President Xi Jinping made it clear this January in his speech in Davos, a few days before Trump’s inauguration, that China will continue economic globalization, defend the hard-won international systems and agreements, and keep its door open.

Xi’s speech echoes the mood of the time. That pledge is not just something nice for China to have, but a necessity. To move China’s economy to a sustainable growth path, to avoid falling into the middle-income trap, globalization and opening-up are the only way forward.

We all know it’s easier said than done. China has its hands full with domestic economic issues. Yes, it will continue making its contributions, and in some areas, providing new possibilities and new perspectives, such as the “Belt and Road” initiative. But the challenges China are facing are unprecedented too.

After 30 years of reform, low-hanging fruit is gone. Future reforms will take place in the toughest areas, affecting many vested interests and taking place amid the change of development models. China needs to brace for these challenges and be aware that the window for that transition is short. Many of the reforms can be carried out only when the economy growth is relatively strong.

The list of reforms is not short, ranging from closing the income gap, and providing better social goods such as education and health care, to the increase of market efficiency by limiting the preferred status of state-owned companies and giving a level playing field to private players. Reform measures have to be carried out very carefully, bearing in mind the complexity of China’s economy today and the various implications of any policy change.

If I can pick one key thing as the top priority on the list, it’s SOE reform. And the core of SOE reform is corporate governance. There are historical and cultural reasons for lax corporate governance in China. But we have to say that the introduction of corporate governance since the late ’90s has largely improved efficiency and made a significant contribution to China’s economic growth. That is further enhanced by China’s pledge to the Organization for Economic Cooperation and Development in 2015 on corporate governance. Now is actually a good time for reform. In the first two months of this year, SOEs saw their profits double from the same period last year, creating an opportunity for change.

There are also other priorities in the reform agenda: further liberalizing the services sector, accelerating urbanization, and reforming the land policies. And then there is the question of further tax reforms to improve business competitiveness.

I won’t exhaust you with the list. But the key issue is simple: China should continue embracing a market economy and moving along the path that has taken it to the current success — reform and opening-up. Even though this concept has been challenged in the Western world since last year, in China the problem is not too much of it, but too little.

So to sum up, there is a short-term economic challenge and a medium-term transition unfolding. But the long-term growth relies on embracing the market economy. And it has to be a market economy that fits China, and it has to be an inclusive one, with eyes not just on efficiency but equality and sustainability. As one famous Oxonian once said, a nation is enriched only by the economic prosperity of its people.

In a confused world, China should be clear about its direction, reform and opening-up. That will help China achieve its own dreams, and a prosperous China in turn will provide a vital stabilizing force for the world economy.