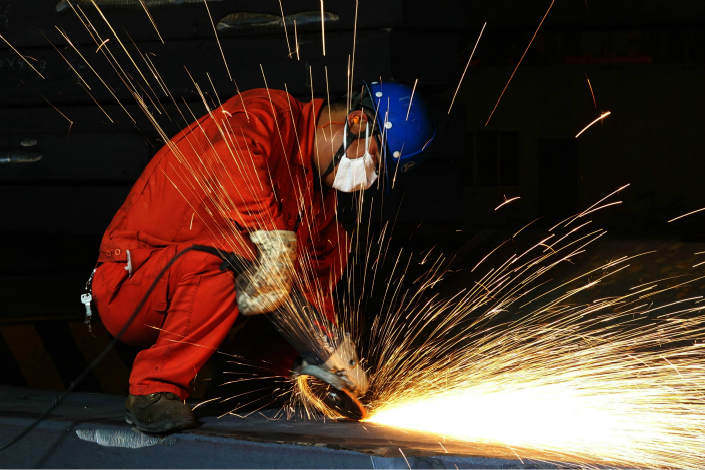 Major steel manufacturers earned a collective 40.3 billion yuan in profits in the five months through May, well above what they earned for all of 2016. Above, a worker polishes a steel mold at Dalian Special Steel Co. on July 10. Photo: Visual China

China’s steel industry profits for the first part of the year outpaced the total for all of 2016 as manufacturers benefited from growing demand and positive effects of a government-led campaign to slim down the bloated sector.

Major steel manufacturers earned a collective 40.3 billion yuan ($5.98 billion) in profits in the five months through May, well above the 30.4 billion yuan for the entire previous year, according to the China Iron and Steel Association. The group added that steel output rose 3.4% to 363 million metric tons (400 million tons) in the first half of the year.

China’s steel industry has suffered over the last six years from weak global prices, slumping demand at home and overcapacity of the domestic sector. Much of that was built over the last two decades with strong support from local governments that were more interested in promoting economic growth in their regions rather than catering to actual demand, resulting in the glut.

In a bid to prop up the sector, Beijing has launched an aggressive campaign to close down smaller steel mills and merger some of the larger ones. One of the biggest mergers last year saw Baoshan Iron and Steel combine with smaller rival Wuhan Iron and Steel to create the world’s second-largest steel-maker.

The campaign began to bear fruit last year when steel prices finally began to rise again in January, ending 50 consecutive months of decline. During the year, an index that tracks steel prices nearly doubled to 99.51 from 56.37 at the start of the year. By the end of June, the index continued to climb to 101.3, and in the latter part of July, it was up to 106.

“Right now it’s quite clear that most companies have seen their cash flow change for the better,” said Xia Nong, an inspector with the National Development and Reform Commission, China’s state planner, speaking at the industry association’s annual meeting.

While output and prices are up, China’s steel exports plunged 28% in the first half of the year to about 41 million metric tons, after the U.S. and European Union imposed anti-dumping tariffs on Chinese steel last year.