By Sun Congying and Liu Xiao 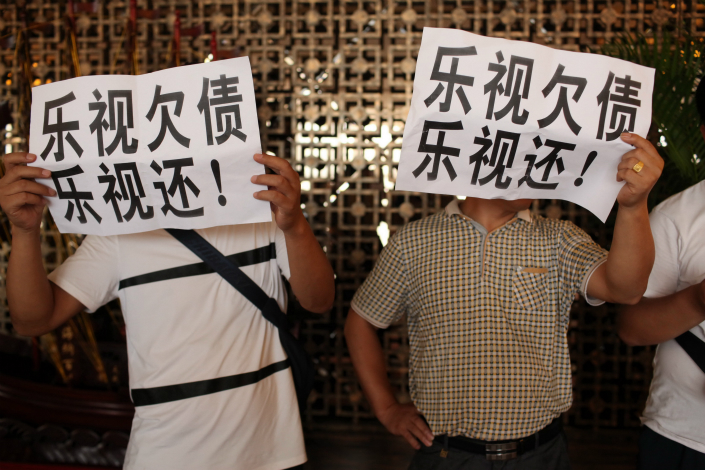 The financially strained tech company LeEco has backed out of a plan to become a founding investor in an insurance company after its many creditors raised objections. Above, some of LeEco’s creditors, including suppliers, demonstrate at the company’s shareholders meeting on July 17 carrying signs demanding that LeEco pays what it owes them. Photo: IC

Debt-ridden LeEco backed away from its $64.7 million commitment as a founding partner of a new insurance company, just days after the plan came to light.

Seven companies including LeEco announced last Thursday that they would be forming a new non-life insurer called Belt and Road Property Insurance Co. However, the plan drew attacks, especially from LeEco’s creditors and suppliers, who have been demanding overdue payments from the beleaguered tech company.

“Given the company’s current financial condition, it does not have the capacity to make external investments. The firm’s senior management has decided to give up on this investment,” a LeEco executive, who spoke only on condition of anonymity, told Caixin.

LeEco’s financial plight started late last year after years of hyper-aggressive investments. In the first half of 2017, its listed arm Leshi recorded a loss of 600 million yuan ($89.27 million), its first ever loss. In the meantime, a large portion of Jia Yueting and Leshi’s assets have been frozen by a domestic bank.

Shanghai-listed coal producer Wintime Energy Co., one of the seven members of the original consortium, said in the Thursday statement that LeEco had planned to take a 15% stake in the new insurer through its Letv Investment Management unit.

The plan is to establish Belt and Road Property Insurance with 2.9 billion yuan in registered capital, making LeEco’s investment worth about 435 million yuan, the statement said.

The parties have signed a cooperation agreement, but haven’t put up any money yet, a source from Wintime Energy’s office of the board of directors told Caixin.

After a new insurer receives a license from the China Insurance Regulatory Commission (CIRC), its founding shareholders have three months to pay the amount they pledged.

As of Thursday, Belt and Road Property Insurance has yet to receive a license.

It is not known whether Wintime has applied for a license. The process for starting an insurance company is long and complicated in China. There are 200 insurance companies currently awaiting approval for a business license.

The CIRC has not issued any new business licenses since March. Since the beginning of this year, the regulator has tightened standards for issuing new licenses, paying particular attention to insurers with unclear business models and uncertain shareholder capital positions.

On June 23, the regulator issued new rules that raised the standards for starting an insurance company. On July 20, the CIRC released a draft regulation on equity management for insurance firms, which proposed more-stringent rules to restrict share sales by shareholders of insurers.