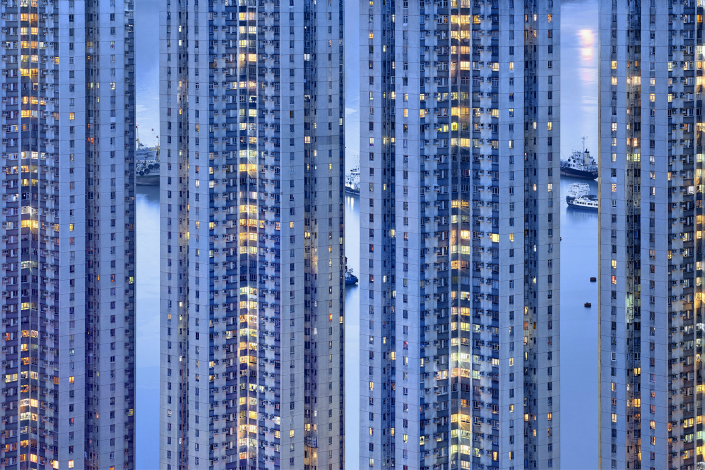 Real estate services firm CBRE says in a new report that it has found “a significant amount of Chinese capital circulating outside the country.” Above, Hong Kong waterfront properties are seen at sunset. Photo: Visual China

(Beijing) — Among Asian countries, China remained the largest investor in the global real estate market during the first half of this year, despite government measures to clamp down on outbound investment in the property sector, a report found.

“Discrepancies between actual investment turnover and official data suggest that there is already a significant amount of Chinese capital circulating outside the country,” according to CBRE.

Beginning late last year, Chinese authorities have tightened controls on ODI to stem capital outflows and prevent the yuan from depreciating further. In 2016, the yuan’s value measured by the official daily fixing rate against U.S. dollar dropped around 6.5%, and China’s foreign exchange reserves fell 9.6%, or $319.8 billion.

It might also suggest that the restrictions on overseas real estate deals may not be the same story for different entities.

Chinese state-backed sovereign wealth funds’ overseas property acquisitions jumped more than 19 times over the first six months from a year ago, largely buoyed by a big-ticket deal in Europe, the report said.

By contrast, state-owned enterprises (SOEs) have scaled back their activity as they are more policy-driven. The SOEs’ overseas property deals dropped 66% from a year ago.

The CBRE report said the sovereign wealth funds are not subject to capital controls because of their roles as special investment instruments for China’s foreign exchange reserves, which remain the world’s largest.

To a certain extent, the unaffected sectors reflect the strategic layout of the Chinese government. For instance, in the aforementioned big-ticket deal, China Investment Corp. acquired Blackstone’s European warehouse firm Logicor for $14 billion, with an eye on forging a logistic network to advance the “Belt and Road” initiative, a massive global infrastructure investment plan backed by Chinese President Xi Jinping.

The sale was the biggest private equity real estate deal in Europe on record, according to Reuters.

Last week, Beijing consolidated its grip on “irrational” overseas investment in sectors such as property, sports clubs and entertainment. Regulations from several government agencies, including the National Development and Reform Commission and the Ministry of Commerce, explicitly stated that outbound investment in real estate, hotels, cinema chains, sports clubs and entertainment will be restrained.

Looking ahead, the CBRE said the new rules will yield a positive short-term impact on the domestic property market as Chinese investors return to their home market because moving capital abroad has become increasingly difficult.

The report also warned that the capital controls could hinder inbound investment from foreign investors, who could worry about an exit route and possible difficulties in repatriating their capital abroad.

Under the new rules, Chinese investors seeking opportunities abroad can opt for leveraging their entities based in Hong Kong or offshore financial institutions to engage in property and land acquisitions.