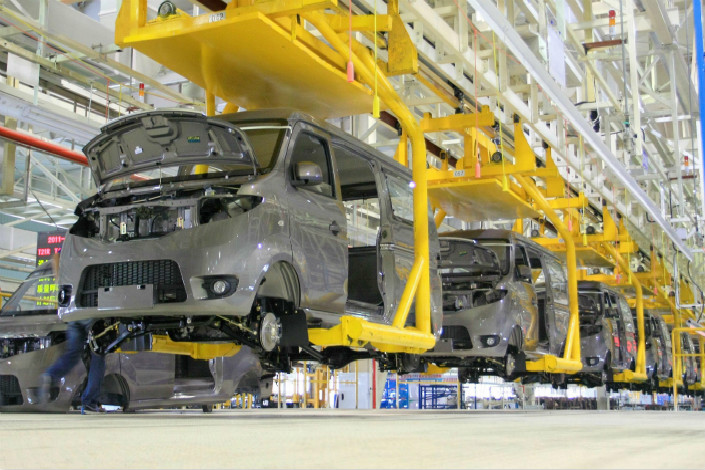 Vehicle bodies move through the Changan Automobile manufacturing plant in Chongqing, in southwestern China, on June 12, 2011. Changan and European microchip firm NXP said they have increased their collaboration into a strategic partnership to tap the smart car market. Photo: Visual China

European microchip giant NXP Semiconductors and Changan Automobile Co., Ltd. said they have upgraded their collaboration into a strategic partnership to tap the smart car market, joining a growing list of similar tie-ups between technology firms and traditional carmakers.

The two companies, which have worked together since 2016, characterized their new strategic framework agreement as a long-term partnership, and said the first phase will focus on car-based infotainment products and services, according to an announcement by the pair on Wednesday. A second phase will focus on the transmission of information between vehicles and other sources.

“With this long-term strategic partnership, Changan Automobile will take a major step forward in establishing itself as an innovation leader in the Chinese automobile industry,” said company vice president Li Wei.

Based in interior China’s Sichuan province, Changan describes itself as the first Chinese company to achieve long-distance self-driving, in addition to its status as one of the nation’s top automakers. NXP is one of Europe’s leading chip designers, and is in the process of being acquired by U.S. telecom chip giant Qualcomm Inc.

“This move is another milestone in NXP’s long-term commitment to the China automotive market,” said Kurt Sievers, general manager of NXP’s automotive division. “NXP will continue to collaborate with Chinese partners and foster local industries with customized semiconductor solutions and strong industry cooperation.”

China is the world’s largest car market, but was a relative latecomer to the field of smart cars that can communicate with their passengers and surroundings to offer everything from autonomous driving to customized entertainment for riders. Two of the nation’s leading internet companies, Baidu Inc. and Tencent Holdings Ltd., are both aggressively moving into smart cars, as part of Beijing’s broader drive to promote the development of artificial intelligence (AI).

In June, Tencent disclosed that it had purchased 5% of U.S. new-energy and smart car maker Tesla Inc., a move that analysts said could give it a boost in smart cars despite its relatively late arrival to the sector.

Earlier this week, Baidu announced a major new milestone for its own driverless car plans, saying it is aiming to roll out a commercially viable, partially self-driving car by the second half of 2019, in partnership with Anhui Jianghuai Automobile (JAC).

Another major player in the space has been online entertainment company LeEco, whose founder is backing U.S. new-energy car maker Faraday Future. But that partnership has faced recent obstacles due to LeEco’s ongoing internal cash crunch, the result of expanding too quickly beyond its online video roots into too many new areas such as cars and smartphones.