The Story Behind ZhongAn’s Blockbuster IPO 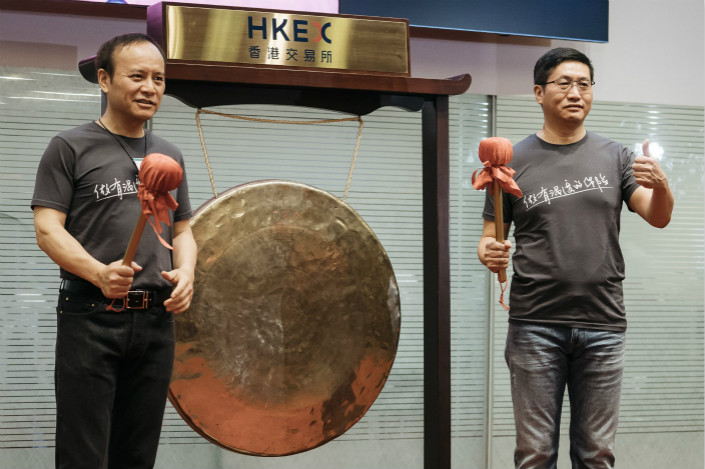 ZhongAn Chairman Ou Yaping (pictured on the left, with CEO Chen Jing) and his family control at least 15.35% of the firm's shares. Ou hopes to hand the firm on to his son one day, someone close to Ou told Caixin. Photo: Visual China

Investors are scrambling for a piece of China’s largest online-only insurer – despite its price tag.

Shares of ZhongAn Online Property & Casualty Insurance rose as much as 18% on their Hong Kong debut Thursday, after a hugely popular initial public offering (IPO) that was nearly 400 times oversubscribed.

Despite its short history and a projection of annual losses for this and next year, the final pricing of IPO shares at HK$59.70 ($7.64) each — the upper end of its marketed price range — puts the four-year-old insurer’s valuation at $11 billion. Though it is still a fraction of insurance giants Ping An and China Life’s market valuations, at $144 billion and $109 billion respectively.

The hype could be explained by the “stars” behind ZhongAn and its offering. Its major shareholders — Ping An Insurance (Group) Co., Alibaba Group Holding Ltd., Tencent Holdings Ltd. — and IPO cornerstone investor SoftBank Group Corp. are all industry leaders, and are famous for their investment track record. Also, ZhongAn is the first internet-only insurer listed in Hong Kong, and that scarcity drew an unusually high demand from investors.

“ZhongAn is a company with both insurance and technology genes, its operating model is completely different from traditional insurance companies,” ZhongAn CEO Jeffrey Chen said.

But after the glory of being Hong Kong’s second-largest IPO for this year by raising HK$11.53 billion, ZhongAn may have some work to do to convince its investors to stay.

Ma Mingzhe, Jack Ma and Pony Ma. They are chairmen of Ping An Insurance, Alibaba Group, and Tencent Holdings respectively, which all have invested in ZhongAn since it opened for business in October 2013.

“Everyone is talking about the three Ma’s,” said Chen Yingjie, deputy manager of corporate finance at Phillip Securities Group in Hong Kong. “Hong Kong’s (retail) investors do not necessarily know about ZhongAn’s business, most are investing in the founders.”

That SoftBank was the largest cornerstone investor in the IPO also helped turn up the heat. The Japanese telecom and internet conglomerate, known for its smart picks in “new-economy” companies, subscribed to nearly half of all shares offered to institutional investors, and now holds a 4.99% stake in the company.

According to an incomplete estimate by Caixin, mainly based on a survey of Hong Kong brokerages, retail investors borrowed at least HK$49.4 billion through margin accounts at the city’s brokerages to subscribe for ZhongAn’s IPO shares.

Hongkong Chinese Ltd., for instance, said it received 1,500 subscription applications worth HK$13 billion. More than ten of these applications sought the maximum allowable number of shares, which is set at half of all publically offered shares according to Hong Kong stock exchange rules.

The strong demand triggered a “clawback” mechanism, with the retail portion now at 20% of all IPO shares, up from 5% previously.

ZhongAn is more expensive than other insurers; but compared to other “fintech” firms, ZhongAn’s price is within an acceptable range, according to China Galaxy International Securities (Hong Kong) Co. Ltd.

From a global perspective, ZhongAn is the first large internet-based insurance company to be listed, making it difficult to find a point of reference for its valuation, China Galaxy said.

According to ZhongAn’s IPO prospectus, from October 2013 to end-2016, the company sold a total of 7.2 billion insurance plans to nearly 500 million customers.

After three profitable years, ZhongAn reported a net loss of 287 million yuan ($43.3 million) in the first half of 2017. UBS Group AG estimates a full-year net loss of 174 million yuan.

Large losses are expected for this and next year, the IPO prospectus warned, citing a few key reasons. First, ZhongAn now needs to pump more money into funds earmarked for future claim liabilities as it is currently selling many long-term plans. Second, operating and administrative expenses are now being buoyed by investments in personnel as well as in research and development. Third, service fees, commissions and consulting fees paid to partners are rising as sales through partners’ platforms continue to rise.

The losses are mainly due to the fact that the company is in an early stage of development and is focused on expanding its operations, ZhongAn added.

In fact, although ZhongAn was previously profitable, this was largely driven by hefty investment income. Its insurance business has never been profitable, according to its IPO prospectus. Its combined ratio, a key metric which measures an insurer’s claims and operating expenses as a proportion of premium income, was 108.6%, 126.6% and 104.7% in 2014, 2015 and 2016 respectively. Percentages higher than 100% mean that a company is making an operating loss on its insurance business.

On the bright side, its claims ratio, a measure of claims payable as a proportion of income from insurance premiums, has been on a downtrend. From 2014 to 2016, ZhongAn’s claims ratio decreased to 42% from 73.4%.

“ZhongAn’s business model is unique, although it is not profitable now, it has a promising future,” said Xu Yibin, CEO of Bright Smart Securities International (H.K.) Ltd. Xu drew a parallel between ZhongAn and Tencent. When Tencent was listed in 2004, smartphones were not yet widely used and the share price was under HK$4, he said. It has since climbed to nearly HK$350, Xu told Caixin, adding that this is etched in the memory of many Hong Kong investors.

ZhongAn’s business model relies on designing insurance policies which can be embedded in their partners’ existing platforms.

One example is product return shipping insurance, the company’s most popular insurance policy by volume. The product, which reimburses buyers or merchants for shipping costs on returns, is embedded in e-commerce site Taobao’s ordering platform.

But the problem is: Although ZhongAn has many clients, they come through the platforms its partners operate. The insurer’s control over them is weak, thus putting it in a passive position, a securities firm analyst told Caixin.

ZhongAn admits that competition in the internet insurance sector may lead its partners to increase their fees. ZhongAn paid 663 million yuan in fees to Ant Financial in the three years between 2014 and 2016.

Another concern is whether ZhongAn’s partners will abandon it for their own subsidiaries that provide similar services. “Ping An Group has its own property insurance business. Although it has a cooperation agreement with ZhongAn, Ping An employees will definitely give preference to their own business if under pressure from performance metrics,” an employee at an insurance firm told Caixin.

This IPO has also put ZhongAn’s largest shareholder under the spotlight.

At 55 years old, Ou Yaping is ZhongAn’s chairman of the board and executive director. His son Ou Jinyu, at just 25 years old, was appointed non-executive director in April to “provide professional opinion and judgment to the Board,” according to a company filing. Ou Jinyu is also a member of ZhongAn’s Investment Strategy Committee.

The reason that Ou Yaping wanted to get his son involved in ZhongAn is because he hopes to pass the company on to his son one day, someone close to Ou told Caixin.

Ou Jinyu worked at US-based investment firm Thrive Capital as an associate between August 2015 and August 2016, according to ZhongAn’s prospectus. Thrive Capital was founded by Joshua Kushner, Ivanka Trump’s brother-in-law. Joshua Kushner is also a founder of Oscar Health Insurance, an internet insurance company. Between 2010 and 2015, Ou Jinyu served as manager of the planning and development department of Sinolink Worldwide Holdings Ltd.