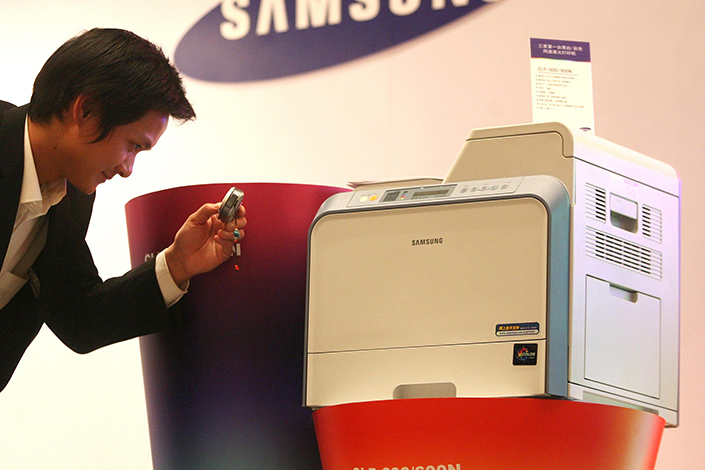 An agreement that would have HP Inc. pay $1.05 billion for the printer business of Samsung Electronics Co. Ltd. would help HP get a stronger foothold in Asia. Above, Samsung displays its CLP-600 color laser printers in Beijing in September 2006. Photo: Visual China

China’s Commerce Ministry has given its conditional approval for HP Inc.’s purchase of Samsung’s printer business, clearing a key regulatory hurdle that would consolidate the U.S. giant’s place as the world’s largest player in the shrinking space.

Conditions set for approval of the purchase include steps to prevent HP from becoming too dominant in the market for A4 laser printers since the U.S. company controls more than 50% of the market in China, the Ministry of Commerce said in a statement announcing its decision on Thursday.

HP “has a dominant market position, and may use unreasonable pricing behavior to lock out or limit others from competing in the A4 laser printer market,” the ministry said. It did not elaborate what conditions it placed on its approval. But such steps would typically require HP to divest related assets it would acquire from Samsung Electronics Co. Ltd. through the purchase.

HP and Samsung announced the deal more than a year ago. The agreement would see the former pay $1.05 billion for the latter’s smaller printer business, which includes 6,000 employees. The deal was seen as important for helping HP to get a stronger foothold in Asia, especially in Samsung’s home South Korean market.

China has become one of the key global markets for winning regulatory approval of such deals since it is the world’s largest market for personal computers and related products.

The deal represents the largest ever in the shrinking printer business, as more and more documents are used electronically rather than in printed form. HP controls about a third of the market, while Samsung controls another 15%, meaning the merged company would control about half of the worldwide market for laser printers, according to data tracking firm IDC.