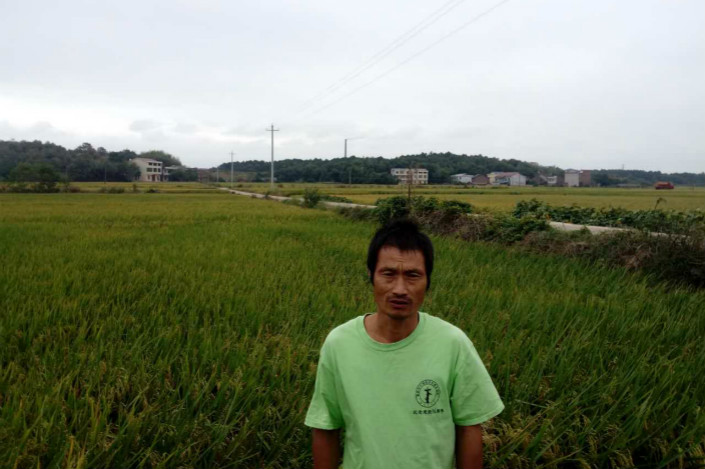 Environmental NGO Greenpeace traced rice products tainted with cadmium back to fields near the industrial park home to the factory which Tang Donghua (pictured) alleges contaminated his crops. Photo: Courtesy of Tang Donghua

Tang Donghua, from Shiqiao village in Hengdong county, was demanding 92,500 yuan ($14,000) in damages from Hunan Chuangda Vanadium Tungsten Co., Ltd. due to crop losses resulting from high levels of cadmium found in the yields and soil in his 0.84 acre paddy field.

Tang’s rice plot is 2 kilometers away from an industrial park, where Hunan Chuangda and several other factories smelting iron ore, lead and copper are located. Environmental advocacy group Greenpeace traced some of the 150 batches of cadmium-laced rice products uncovered by government inspectors in the southern province of Guangdong in 2013 back to fields near this industrial park. But authorities are yet to conclude what led to contamination in the area.

Tang, 46, first sued the scrap metal recycler at Hengdong County People’s Court in early 2015, but his case was quickly dismissed due to insufficient evidence. An appeal to the Hengyang Intermediate People’s Court, paved the way for a retrial in December 2016.

In his second lawsuit, Tang also sought an order from the county court that would require the company to pay for restoring the metal-contaminated soil, documents from the latest trial viewed by Caixin showed.

According to test results presented at the retrial, rice samples collected from Tang’s fields contained from 0.46 to 1.7 milligrams of cadmium per kilogram, way above the 0.2 milligrams per kilogram standard set by the country’s food and drug administration. Hunan University’s Expert Testimony Center also found excessive levels of cadmium in soil samples taken from his 0.84 acre paddy field in Nov. 2015.

But the Hengdong County People’s Court, in a ruling released Tuesday, dismissed the case saying there wasn’t enough evidence to prove that wastewater discharged from the plant contained cadmium. Tang also failed to establish a link between his losses and pollutants from the factory, according to court documents, although the court acknowledged cadmium contamination of Tang’s field and paddy yields.

However, Tang’s lawyer Hu Shaobo said his client was unable to produce the required evidence because government environmental inspectors didn’t monitor the level of cadmium in wastewater from plants at the industrial park, and therefore historic data wasn’t available. Officials only monitored five other pollutants, he said.

The county court also said that wastewater from the factory and the industrial park could not flow into his client’s paddy field as there is a railway line in between. Hu disputed this conclusion, saying there were culverts which allow wastewater to flow into trenches surrounding the fields on the other side of rail line.

Tang hasn’t yet decided if he will launch another appeal, Hu said.

The massive discovery of cadmium-laced rice in Guangdong was among a string of food scares linked to heavy-metal contamination of farmland in China in recent years.

Excessive levels of cadmium were found in wheat fields near battery factories in Xinxiang in Henan province, a region known for wheat production.

Exposure to the toxic chemical can lead to kidney stones or even renal failure, according to the World Health Organization. It can also weaken bones, damage the respiratory system and cause cancer.

Individuals affected by industrial pollution — including those living in areas labeled as “cancer villages” by public health experts — have struggled to take polluters to court due to difficulties in collecting evidence.

Feng Jun, a farmer from the northern province of Hebei, has been battling two steel factories for over a decade after both his daughters were diagnosed with leukemia. Feng says that while doctors said the pair may have got sick from contaminated water, they were unwilling to come forward to testify. The case is still pending.