BMW, Great Wall in Talks to Roll Mini Into China 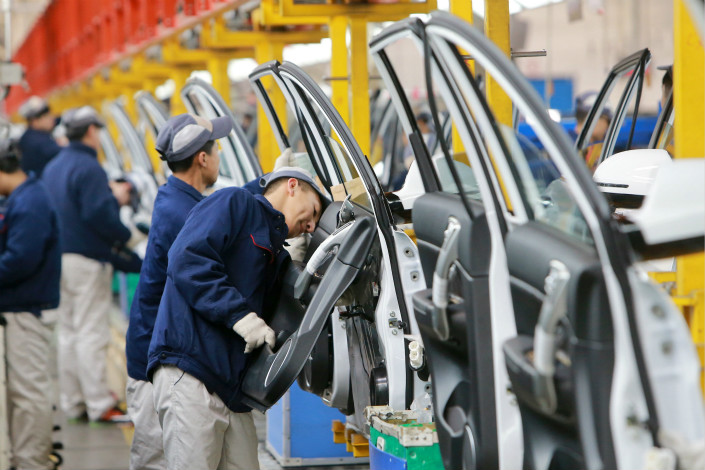 Great Wall Motor did not specify whether a potential tie-up with BMW would make gasoline-powered Mini models or electric ones, though there has been speculation that a joint venture would manufacture electric-powered versions of the popular car. Above, workers assemble doors at a Great Wall auto factory in China’s northern city of Tianjin. Photo: Visual China

Great Wall Motor Co. Ltd. said Friday that it is in talks for a joint venture to make BMW’s Mini car models in China, ending days of speculation that had sparked a rally for the Chinese company’s shares.

A site for the venture is still being discussed, according to Great Wall, which has no previous relationship with the German auto giant. The new partnership would be the second car-making venture for BMW in China, following its older joint venture with Brilliance China Automotive Holdings Ltd., based in the northeastern city of Shenyang.

Great Wall did not specify if the new venture would make traditional gasoline-powered Mini models or electric ones, though it did say that some output could eventually be exported. But China’s state planner has said that in principle it will not approve any new foreign joint ventures involving traditional gas-powered cars because the market is already oversupplied.

Additionally, foreign automakers are under pressure to quickly set up electric car-making ventures in China to comply with a strict government program requiring all companies to sell set percentages of their products as new-energy vehicles starting in 2019.  As a result, names like Volkswagen AG, Ford Motor Co. and Renault-Nissan have all announced electric car joint ventures in China this year.

Those conditions have led many observers to speculate that the new BMW-Great Wall joint venture will be designed to manufacture electric-powered versions of the popular Mini.

“As of the date of this announcement, the company and BMW have not entered into any legal (agreement) for the establishment of a joint venture in China,” Great Wall said in its statement. It added that both companies signed an agreement in April 2016 to study the feasibility of developing electric vehicles and traditional power vehicles in China. It added they entered another agreement in February this year to evaluate the feasibility of cooperation for vehicles under the Mini brand.

Great Wall shares jumped 13% this week on rumors of the tie-up, and were suspended on Thursday pending an announcement. The company said its shares will resume trading when markets open on Monday.