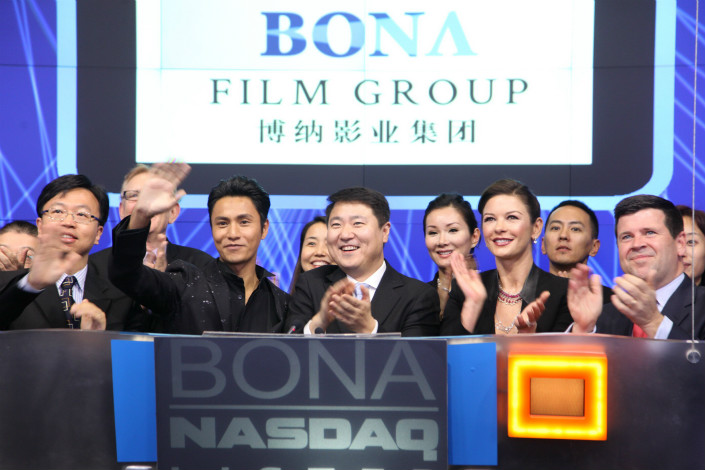 A third company from China’s burgeoning financial technology (fintech) sector has filed to raise hundreds of millions of dollars in an offshore IPO, amid a flurry of other listing plans in what is shaping up to be one of the hottest seasons for Chinese media and technology offerings in three years.

Ppdai Group Inc.’s newly announced plan to raise up to $350 million through a New York initial public offering (IPO) comes after the hugely successful listing of online-only insurer ZhongAn Online Property & Casualty Insurance Co. Ltd., whose shares have risen nearly 50% since it raised $1.5 billion last month. The plan also comes as online microlender Qudian Inc. gets set to raise up to $825 million in a New York IPO set to price and debut later this week.

Ppdai’s listing plan is just the latest to make major progress since the end of last week. Another first-to-market offering by China Literature, the online literature unit of Tencent Holdings Ltd., was approved on Friday and launched its roadshow Monday. And Sogou, China’s No. 3 online search engine that is backed by Sohu.com Inc. and Tencent, also announced it has filed to make a New York IPO.

“The recent increase in IPO filings may be reflective of not only increased capital market demand, but also issuers seizing on growth opportunities,” said Ryan Roberts, an analyst at MCM Partners.

“Several of the recent filings are companies with businesses focusing on ‘new’ industries: fintech, big data, and artificial intelligence, which are undoubtedly the future. I expect we will see more companies coming to market capitalizing on the trend, and also heightened competition as R&D investment in China accelerates.”

If the three fintech offerings by ZhongAn, Qudian and now Ppdai price at the top of their ranges, they will collectively raise about $2.7 billion, a large sum for an industry whose players have mostly been formed in the last five years as China opens its financial services market to private investment.

Ppdai would be the largest of three peer-to-peer (P2P) lenders to list to date, following earlier U.S. IPOs by Yirendai Ltd. and China Rapid Finance Ltd. Such companies, which have been the source of controversy in China due to their sometimes lax practices, raise money by taking in deposits from small investors and then lending that money out to borrowers.

Ppdai said its loan origination volume jumped more than four-fold to nearly $4 billion in the first half of this year, versus $956 million a year earlier. Its revenue posted similarly strong growth to 1.7 billion yuan ($258 million) from 354 million yuan a year earlier, while its profit grew 25-fold to just over 1 billion yuan.

“We strategically focus on serving borrowers between the ages of 20 and 40, the young generation that is typically more receptive to internet financial services and is poised to become the major driving force of China’s consumer finance market,” the company wrote in its prospectus filed in the U.S. on Friday.

Meantime, Sogou Inc., the search engine backed by Tencent and Sohu, has filed a registration statement to make its own New York IPO, Sohu said in a statement also on Friday in the U.S. It said a fund-raising target has yet to be determined for the stock, which it has applied to be listed on the New York Stock Exchange. Sohu is one of China’s oldest internet companies, and has previously made separate listings for its online game division. It has also discussed a similar separate listing for Sogou.

In Hong Kong, China Literature was cleared for an IPO on Friday and released its prospectus on Monday. Previous reports had indicated the offering from China’s leading online literature provider was aiming to raise up to $800 million in the Hong Kong listing. In its prospectus, the company said it posted a profit of 213 million yuan in the first half of this year, reversing a 2.4 million yuan loss a year earlier. Its revenue nearly doubled in that period to 1.92 billion yuan.

And in one notable listing plan on the Chinese mainland, filmmaker Bona is planning to raise up to 1.425 billion yuan in China, according to a prospectus released by the securities regulator on Friday. That would make Bona one of the first companies to make an IPO in China among a wave of U.S.-listed firms that privatized over the last two years, most aiming to re-list in China at higher valuations.

A few of those companies have re-listed in China already, although most or all have done so through “backdoor listings” by injecting their assets into previously listed shell companies. Bona, whose backers include industry giants Tencent, Alibaba Group Holding Ltd. and Wanda Group, said its 2016 profit totaled more than 100 million yuan, about 2.6 times what it was the year before, according to its IPO prospectus.