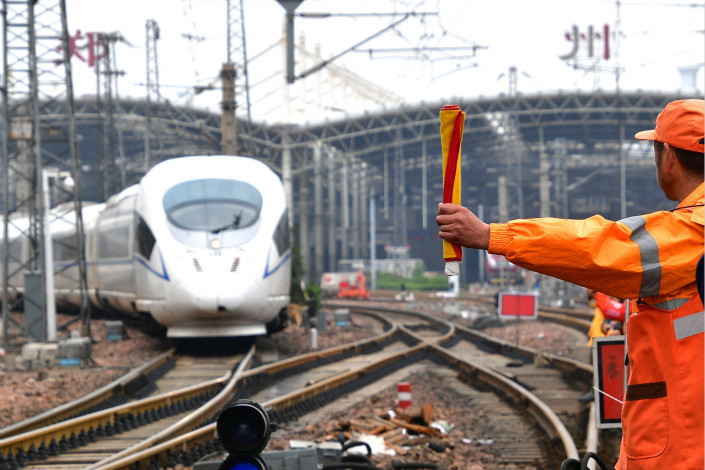 China Railway Corp. (CRC) is trying to gain control over a public-private rail project in which CRC, the operator of the nation's national rail network, is a minority stakeholder, sources say. Photo: Visual China

Just a month after its signing, a landmark railroad-building partnership controlled by private-sector money is hitting its first major obstacle due to alleged bullying tactics by the national rail operator, a minority stakeholder.

The project, signed last month, was part of a bigger program that Beijing hopes will see private-sector companies help finance big public infrastructure projects like railroad development in a bid to lighten the government’s debt burden.

But now CRC is throwing its weight around to try to gain control over the project, citing issues such as its own ability to guarantee project safety, several sources with knowledge of the situation told Caixin.

As operator of China’s national rail network, including the country’s state-of-the-art high-speed train system, CRC holds a major influence over the ability for such smaller projects to move forward. It has extensive experience building such systems, and must typically sign off in other areas, including the approval of feasibility studies, and certification that projects will be able to integrate with the national network.

One source close to the Zhejiang project told Caixin that costs under CRC’s system are typically at least 10% higher than what project operators could achieve if allowed to run the projects. “If we give over the authority for construction of this to CRC, future projects will have even more difficulty attracting private money,” he said, speaking on condition of anonymity due to the sensitivity of the situation.

Chinese laws aimed at promoting such partnerships say that public-private entities building such projects should have the flexibility to hire who they want, be it government rail experts, professional organizations or their own development teams.

A CRC official pointed out to Caixin that local bodies formed to oversee such projects usually lack relevant experience, especially for sophisticated high-speed rail. He added that local officials are also more beholden to relationships with local suppliers and other business partners, which might not be the most suitable for a project.

The conflict in Zhejiang reflects an imperfect separation of CRC from the former government agency that ran and oversaw the nation’s railroads in 2013, said Zhao Jian, a professor at Beijing Jiaotong University. That move was aimed at making CRC into a more-commercial entity, while leaving the remaining National Railway Administration as more of a governmental oversight body.

As a result of that imperfect separation, CRC still has some approval and oversight duties for rail projects even though such authority should fall to the National Railway Administration, he said. He added that in projects like the one in Zhejiang, investors should have a say over the development based on the size of their shareholding, and CRC should not have the ability to unilaterally interfere.