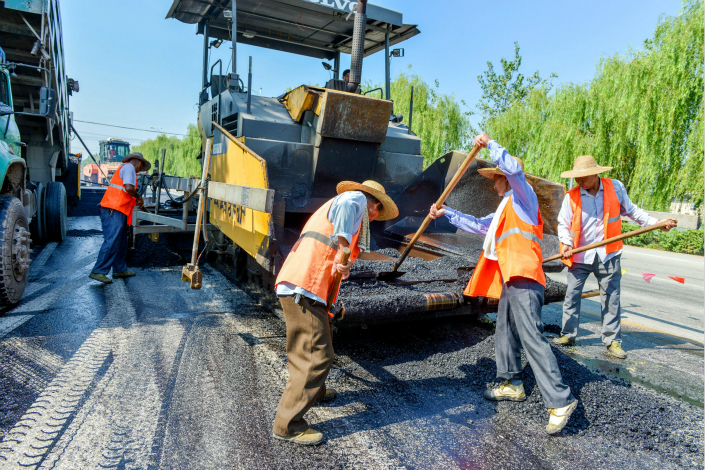 So far this year, 33 urban construction investment companies have issued statements saying they would no longer act as local government financing vehicles, up from 25 in 2016 and five in 2015. Photo: Visual China

As Beijing continues to rein in excessive government borrowing, several companies set up by local officials to act as financing platforms for infrastructure projects have announced they are cutting official ties.

However, many wonder if these announcements accurately reflect reality.

Since the beginning of this year, 33 urban construction investment companies have released statements saying they would no longer act as local government financing platforms, compared with 25 such announcements in 2016 and five in 2015.

These announcements are taken to mean that the companies will no longer serve as vehicles for local government borrowing.

Since the early 1990s, urban investment companies mushroomed across China as governments used them to raise funds for economy-boosting construction projects. Most of the investment companies rely on government contracts and fiscal subsidies, raise money from banks or bond issuance to finance infrastructure projects and enjoy local authorities’ implicit guarantee on their debts.

Since 2010, the central government has issued a series of policies to regulate the fundraising of urban investment companies and to ask local governments to stop borrowing through such companies, as it moves to rein in risks related to local government debt. However, the policies have had a limited effect as most of the companies still act as financing vehicles for local authorities.

But this year’s jump in the number of companies declaring that they will retreat from government borrowing has sent shockwaves through the market. In early August, Changde Economic Investment Co. said in a statement that it would no longer engage in borrowing for the local government, triggering a sell-off of the company’s bonds. Changde Economic Investment was established in 1992 by the Changde city government in Hunan Province to facilitate infrastructure spending.

The in early October, Pingdingshan Development Investment Co., an urban investment firm in Henan Province, also said it would stop raising funds for the local government.

But whether the companies’ will truly strike out on their own remains in doubt, as many analysts believe that these announcements are empty gestures in response to recent policies that aim to tighten control over government borrowing.

“Most of the financing vehicles’ statements are simply words or just aim at securing future borrowing by putting distance between themselves and governments,” said Huo Zhihui, deputy director of rating technology at China Bond Rating Co.

Urban investment companies have issued statements separating themselves from local governments in the last two years as “without making such statements, some companies can’t get loans (from financial institutions),” said Ji Fuxing, an economics professor at the Chinese Academy of Social Sciences.

Since late 2016, the central government has imposed stricter limits on local government borrowing. It also highlighted cutting debt in its 2017 work agenda.

In May, six central government bodies, including the Ministry of Finance, the central bank and the National Development and Reform Commission issued a circular on local government debt management that required urban investment companies to promise not to engage in financing for governments before they can issue new bonds. Companies have rushed to make such promises with an eye on skirting financing restrictions, said Xu Hanfei, an analyst at Merchant Securities.

Another fixed-income analyst told Caixin that some financial institutions already require urban investment companies to provide such a statement as a prerequisite of getting a new loan.

“These announcements are merely symbolic,” said the analyst, as most of the companies have retained their close government ties.

For instance, Pingdingshan Development Investment, which is wholly owned by the Pingdingshan city government, sees over 80% of its revenue come from infrastructure construction and public utility projects, which are mainly government contracts.

Since 2014, the central government has encouraged urban investment companies to transform their operations to cut their reliance on government spending, but progress has been slow.

Lou Jiwei, China’s finance minister from 2013 to 2016, once said the companies’ lack of sustainable operating capital, their unprofitability and their complicated relationships with local governments are the main factors hindering their transformation into market-oriented business entities.

Some urban investment companies with sound business operations, mostly in big cities like Beijing and Shanghai, have completed their transformation into independent entities, but most other firms are still suffering from heavy debt overhang, reliance on government support and poor asset structure, said a source from a midsized platform company.

Hu Hengsong, managing director of Industrial Securities’ fixed-income department, said since the major executive positions of the companies are usually occupied by local officials, the boundary between administrative power and business management is blurred.

Analysts said financing platforms can only transform themselves when local governments’ desire to borrow is effectively contained.

Local officials looking to get ahead care a lot about investment and growth during their tenures, but care very little about how the money can be paid back. Any loan repayment issues will be left to their successors, said the Ministry of Finance official, who declined to be named.

Smooth coordination among different regulators is also crucial. “Under the current pattern of multiple regulators, coordination is very difficult,” the official said.

Under China’s financial regulatory system, different fundraising activities may fall under the oversight either of the China Banking Regulatory Commission, the National Development and Reform Commission, the China Securities Regulatory Commission or the central bank. For instance, state-backed companies’ bond issuances are regulated by the reform commission while borrowing from banks and trusts are supervised by the banking regulator. Other financial products are under the scrutiny of the securities regulator or the central bank.

Because supervisory responsibilities are highly divided, different regulators have their own concerns and demands for local government financing vehicles, one regulatory official said.