Home Sales Centers in the South Close to Shun Inspectors 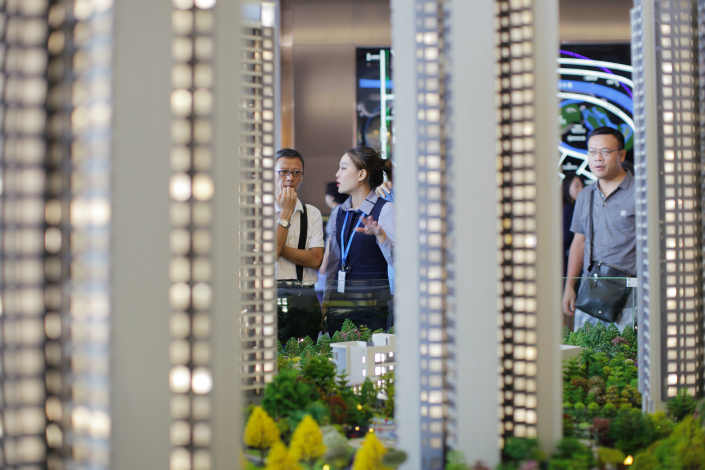 Guangzhou sales offices, such as the one pictured, have shut down to avoid investigators sent from Hainan province tasked with ensuring rules on fair pricing set by the top economic and housing authorities are not being ignored. Photo: Visual China

In Guangzhou, while the government is probing misconduct among property developers, many developers have temporarily closed their sales centers — although none will admit that they are seeking to avoid regulators.

“All sales center staff members have gone for outdoor sports training,” said a security guard in the car park of a residential project in Guangzhou’s Huangpu district.

And five kilometers (3.1 miles) east, another sales center was going through a “thorough refurbishment.”

“No deals can be done recently. We will contact you some time later,” another salesperson apologized repeatedly to disappointed potential homebuyers outside the gate of the center.

Over the past week, many property developers in the capital city of the southern province of Guangdong have closed their sales centers, trying to avoid government investigators who are conducting on-the-spot inspections of pricing misconduct.

About a month ago, the National Development and Reform Commission (NDRC), the country’s top economic-planning body, and the Ministry of Housing and Urban-Rural Development launched a campaign to crack down on nine types of pricing misconduct by real estate developers and agencies, such as delaying sales to profiteer from price rises and signing side contracts with home buyers to bypass price caps enforced by the government.

The NDRC and the housing ministry have said they would “expose typical cases,” “blacklist” offenders and make sure violators “pay a high price.” It is the first regulatory action following the 19th National Party Congress last month, where new party leaders were elected.

A clear message has been sent: the government is unlikely to loosen the grip it has had on the real estate market since September 2016.

The two ministerial-level agencies have asked the local authorities to carry out investigations within their jurisdictions for a month from Oct. 30. And by Dec. 20, they will be required to submit a report that includes six “typical cases” of misconduct.

And what the sales centers in Guangzhou are avoiding are external inspectors sent from other provinces — cities where home prices have risen particularly quickly are trading investigators to minimize potential partiality or local biases. Apart from Guangzhou, 14 other cities are included in the special arrangement, such as Beijing, Hangzhou in the east, Changsha in central China and Xi’an in the northwest. Sources close to the Guangdong provincial government said investigators from the southern island province of Hainan are conducting checks in Guangzhou and Foshan.

To avoid being caught as “typical cases, many projects have closed (their sales centers) for a week” since the Hainan inspectors arrived last week, said an employee of a real-estate development firm, who declined to be named.

So-called decoration contracts — arrangements that builders adopted to skirt limits on sale prices — remain a major target of the nationwide crackdown this time.

These contracts are tacked on to the main property purchase agreements. They enable developers to charge separately for fitting out and decorating apartments.

As these costs are not counted towards the official sale price, which is recorded on the government-run registration system of applications for permit to sell new homes, these side contracts offer a way of recouping lost revenue from lowering “official” prices to obtain the authorities’ green light to start selling.

But such side agreements have raised the actual down payments for homebuyers because they can’t take out mortgages on decoration contracts and have to pay in cash. These side contracts also create loopholes for developers to exploit, when it comes to issues such as compensation for delays in the completion of construction, which is usually calculated based on the official sale price of the property.

A Caixin investigation found that, for example, the real sale price of new residential properties, which includes charges in the decoration contracts, in Guangzhou’s Huangpu district is between 21,000 yuan and 27,000 yuan ($3,170-$4,070) per square meter, even though the government has set its “suggested price” at 15,000 yuan to 16,000 yuan per square meter.

“This is not developers’ fault,” said an executive with a real-estate development company. “If the government doesn’t set a limit on the price, we’d certainly love to sell in compliance with terms in the official contracts.”

In reality, local governments have been turning a blind eye on these gimmicks, in part because they are concerned closing these loopholes might force developers to suspend sales, which will potentially lead to a supply crunch and push home prices up further.

“That will be even more undesirable for local authorities, and so they have to give tacit consent to these side contracts,” an employee of another real-estate development firm told Caixin.

But by bringing in non-local inspectors, which is unprecedented, such connivance is expected to be contained.

An executive with another property development firm, who spoke on condition of anonymity, said: “It will reduce (local governments’) harboring of (developers’) misconduct.”