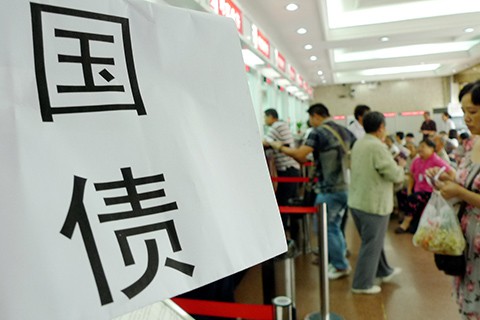 The yield on China’s benchmark 10-year bond settled at 3.993% after topping 4% in earlier trading. Yields on the bonds, which move inversely to prices, briefly hit 4% last week for the first time since October 2014.

The draft guidelines will unify rules covering asset management products issued by all types of financial institutions and will set leverage ceilings on such products, aiming to curb asset price bubbles and rein in shadow banking activity, according to a statement issued by the People’s Bank of China.

But some bond market watchers said the guidelines were just a trigger for the rout as more fundamental reasons grow out of banks’ liquidity drain and growing bearish sentiment among investors.

The yields on policy-bank bonds rose faster than those of government bonds, resulting in the biggest spread since 2015.

Wang said he expected government-bond yields to continue rising in the fourth quarter as a result of large debt auctions and weak demand.

Meanwhile, the central bank refrained from injecting extra cash into the financial system. The People’s Bank of China pumped in 190 billion yuan ($28.7 billion) through reverse-repurchase agreements on Wednesday, only enough to cover the amount of maturing agreements.

A trader at a bank fixed-income department said the market is waiting for any positive news or a big buy order to stop the declines. Otherwise, the bearish sentiment will probably persist, the trader said.