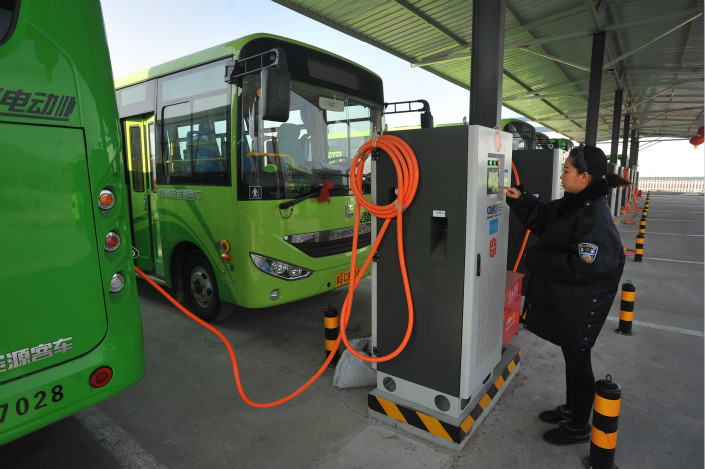 A Ministry of Transportation spokesman said that China is likely to have 600,000 electric vehicles being used for public transportation by 2020. Photo: Visual China

China is expected to have 200,000 electric buses for public use by the end of 2017, meeting a 2020 target set for greening its public transportation sector.

Local government-backed taxi and cargo services now have about 100,000 electric vehicles in their fleets, Wu Chungeng, a spokesman for the Ministry of Transportation, said.

Wu attributed the progress to Beijing’s efforts to promote and support the industry and said the total number of electric vehicles used for public transportation is expected to rise three-fold to 600, 000 units by 2020.

China has now become the world’s largest electric car market with more than 500,000 units sold last year, or nearly half of the global output. So far, this growth has been fueled by government incentives, including subsidies.

But the government plans to phase out these subsidies by 2020, and electric car makers will have to find new business models. In September, the authorities said they plan to roll out a quota system in 2019, where all carmakers have to ensure that a certain percentages of sales come from low- or zero-emission vehicles. The quota will be gradually increased, forcing automakers to buy “credits” from other producers for every conventional car they make.

Earlier this month, policymakers hinted at plans to allow foreign carmakers to set up wholly owned electric-vehicle businesses in its free-trade zones in a major shift in policy governing the country’s auto sector.

Apart from technology issues that limit battery capacity, China’s fledgling electric vehicle industry is also struggling with a shortage of charging stations and other infrastructure issues.

As of 2016, there were about 150,000 charging stations across the country, according to China’s National Energy Administration. But that was far from enough to meet market demand, industry experts said.

Investors also preferred to build charging stations for public buses due to stable demand, instead of private passenger vehicles, which discourages individuals from purchasing electric vehicles.