By Wang Jing and Han Wei 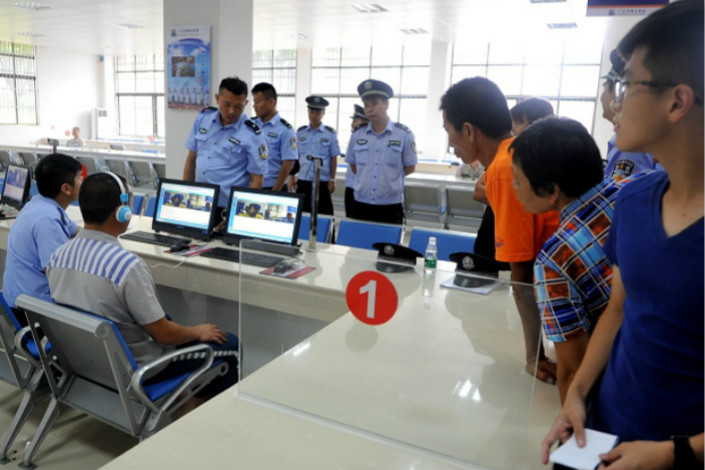 Family members watch an inmate talk to his relatives on a computer in June 2016 at Foshan Prison during in an open house day to showcase the prison's new system for inmates to communicate with family members over the internet. Photo: Foshan Prison

A privately owned furniture and electric manufacturer in Southern China’s Guangdong province was sued for bribing jailers to obtain cheap prison labor, shedding light on graft cases that have brought down several officials at a city prison.

A court in Guangzhou, the capital of Guangdong, heard the case Thursday against Heshan Chuangmei Industrial Development Co. for allegedly paying 318,000 yuan ($48,116) in bribes to officials at the Foshan Prison.

Many Chinese prisons operate factories taking orders from companies at lower costs and allowing inmates to take on paid work. Li told the court that Zhang, who was deputy warden of the Foshan Prison since 2001, asked for kickbacks. Zhang was placed under investigation by the Communist Party’s graft watchdog early this year.

“It is the rule” for prison officials to demand kickbacks, Li cited Zhang as saying.

In a statement presented to the court, Zhang said he shared the money from Chuangmei Industrial with the warden, Li Zhaoxiong, who was sacked and placed under graft probe in July 2016.

According to written testimony from Li Zhaoxiong, who had been warden of the Foshan Prison since 2005, kickbacks have been involved in the prison’s business partnerships with several companies.

Information released by the Foshan city government showed that since 2016, six senior or former officials of the Foshan Prison, including Zhang Yuanhui and Li Zhaoxiong, have fallen under graft investigation for alleged bribery.

Sources close to the matter told Caixin that investigators targeted the Foshan Prison during investigations of Wu Jinning, former head of Foshan city’s Justice Bureau. Wu, probed for corruption since June 2016, was the party head of the Foshan Prison between October 2015 and June 2016.

Chuangmei Industrial's lawyer said the company should not be convicted if the bribes were paid on the officials' request and the company didn't benefit illegally. The court said it will issue its verdict later.