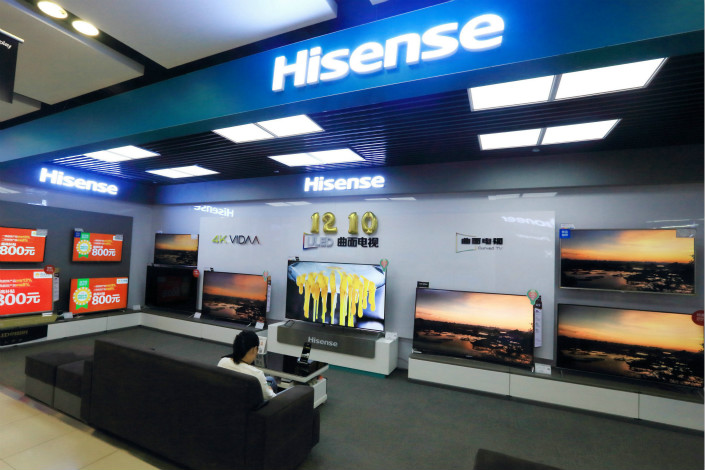 In its lawsuit, Chinese electronics manufacturer Hisense has demanding that three Sharp units pay it $1.5 million in compensation for infringing on one of its patents. Photo: Visual China

Chinese television manufacturer Hisense is suing its former Japanese co-star over patent infringement, as their long-running dispute shows no signs off going off air.

Hisense Electric Co. Ltd. has filed a lawsuit against three Chinese subsidiaries of Sharp Corp., arguing that nine Sharp television models produced and sold in China make use of a Hisense patent, according to a statement by Beijing Intellectual Property Court on Wednesday.

Hisense is seeking to stop Sharp from infringing on this patent, and is demanding the three Sharp units compensate Hisense to the tune of 10 million yuan ($1.5 million).

Online retailer Suning Commerce Group Co. Ltd., which sold the products involved in the case, is also among the companies accused.

Hisense has filed a similar lawsuit with a court in coastal Qingdao, where it is headquartered, several Chinese media outlets reported.

Sharp President Tai Jeng-wu said that the patent that Hisense refers to in the latest lawsuit is invalid, according to news portal Sina.

Hisense’s latest move has been interpreted by some observers as an act of revenge on Sharp, which has sought to renege on a five-year branding license for its TV business with the Chinese company, an agreement signed before the arrival of Sharp’s new owner, Taiwan-based manufacturer Foxconn Technology Group.

In 2015, Hisense spent $23.7 million to purchase Sharp’s television factory in Mexico, which came with the rights to manufacture and sell televisions using the Sharp brand for five years in the Americas, except Brazil.

The deal helped Hisense’s revenue generated overseas grow by 23% to 9.7 billion yuan last year, while domestic revenue dropped by 6% during the same period.

However, a year later, struggling Sharp secured Foxconn as its largest shareholder. Two months into the new ownership, Tai “menacingly approached” Hisense and demanded the company return Sharp’s license, an executive at Hisense told Caixin. However, the Chinese company continued to make and sell TVs under the Sharp brand in accordance with the original contract.

Sharp accused Hisense of selling “shoddily manufactured, deceptively advertised” televisions in the Americas under its name, which it said has tarnished Sharp’s reputation and led to an overall perception of the brand as being “cheap,” according to a complaint it filed in May with the Superior Court of the State of California.

In late September, the U.S. International Trade Commission started to probe Hisense after Sharp accused the Chinese firm of infringing on its patents, and said it would set a target date for completing the investigation within 45 days.