By Kong Xiaoqi and Pan Che 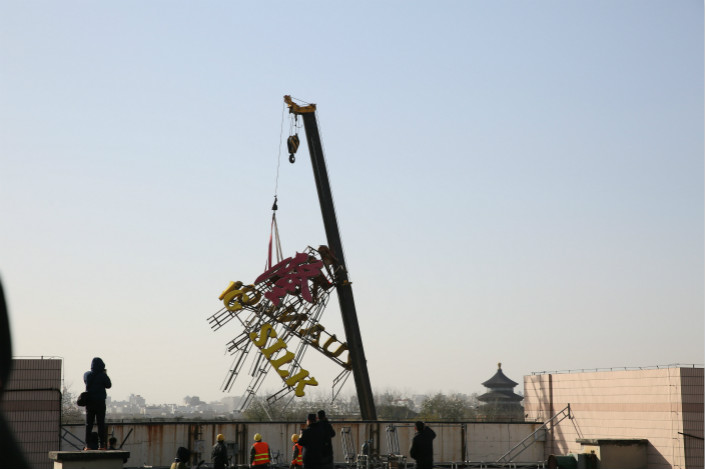 As of the end of last week, nearly a third of the 27,000 noncompliant billboards have been removed from buildings in what authorities have called the “skyline operation” in Beijing. Above, a crane lifts a business sign off a building in Beijing on Nov. 28. Photo: Visual China

Beijing is ramping up a citywide campaign to tear down billboards and logos that protrude from the edges of buildings in a bid to remake the city’s skyline.

As of the end of last week, nearly a third of the 27,000 billboards labeled irregular by municipal authorities have been taken down in the “skyline operation,” the government-run Beijing Daily reported, citing official sources.

The newspaper said the skyline is a crucial part of the city’s appearance and that the government’s actions aim to return “a beautiful skyline” to the capital.

The Beijing government ordered the removal of billboards and logos in a document published in September, and then the operation was stepped up at the end of November to “foster a city with a visually clean and bright skyline and to build a world-class harmonious and livable city.”

Banks, hospitals, luxury hotels, internet companies and even some state-owned enterprises and government organizations have lost the “titles” fixed to the roofs of their buildings in recent days.

All logos and billboards fixed to the edges of buildings, both the top and the sides, are being targeted, according to a statement issued on Nov. 27 by several official bodies, including the Commission of City Management. The statement also urges government organizations and state-owned enterprises to set a good example and remove their logos voluntarily.

This crackdown has been a trending topic on Chinese microblogging platform Sina Weibo, with many users sharing pictures of billboards and logos being removed by cranes or mocking the operation.

Chinese National Geography, a popular magazine on geography and cultural topics, posted a picture showing their logo being removed from the headquarters by a crane accompanied with a caption reading that they are “becoming bald, please wait for our logo to reappear in another form.”

“I don’t think our cityscape has become more attractive (with buildings) looking like bald heads. Now, those of us with a terrible with sense of direction won’t be able to find a place, even when we are there,” said one Weibo user.