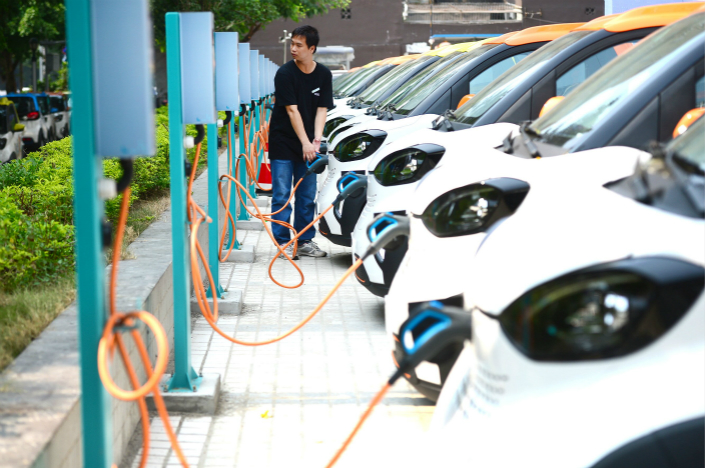 The tax waiver, rolled out in 2014 along with other state subsidies, have helped make China the world’s largest electric vehicle market with more than 500, 000 units sold last year, almost half of global output. Photo: Visual China

China is planning to extend a tax rebate on the purchase of new-energy vehicles as part of efforts to boost the country’s fledgling green transport industry, several sources close to policymakers told Caixin.

The government will continue to waive the current 10% purchase tax on new-energy vehicles — a category that includes hybrid cars as well as those powered exclusively by electric batteries or hydrogen fuel cells — until 2020, people with knowledge of the matter said. The current tax rebate policy is due to expire at the end of the year.

The tax waiver, rolled out in 2014 along with other state subsidies, have helped make China the world’s largest electric vehicle market with more than 500,000 units sold last year, almost half of global output.

But, lucrative state handouts have also led to overcapacity, prompting a government probe into“low-quality, blind expansion” in the electric vehicle manufacturing sector in October, according to the Ministry of Finance.

Earlier investigations also uncovered widespread subsidy fraud where some companies tried to pass off conventional vehicles as new-energy models by installing an electric battery or falsified data to qualify for state support.

In a bid to weed out weaker players, China announced it will completely phase out subsidies to electric vehicle-makers by 2020. Beijing intends to slash subsidies by 20% starting next year, instead of waiting until 2019 as originally planned, sources close to policymakers told Caixin last month.

Instead, Beijing unveiled a quota system in September that requires all carmakers to ensure that a certain percentages of sales come from low- or zero-emission vehicles, starting from 2019. The quota will be gradually increased, forcing automakers to buy “credits” from other producers for every conventional car they make.