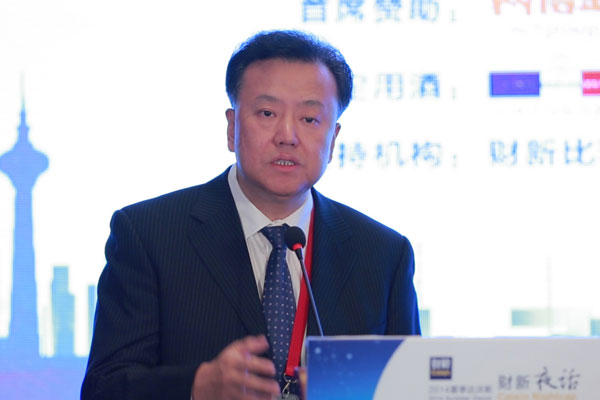 Yan Qingmin has spent decades in various jobs in the banking regulatory system. Above: Yan speaks at the 2016 Caixin Summit. Photo: Caixin

Yan Qingmin, the vice mayor of the northern port city of Tianjin, will become a vice chairman of the China Securities Regulatory Commission, Caixin has learned from people close to the matter.

The Communist Party’s Organization Department, which oversees the appointment of government officials, made the appointment. Yan will take the new post after related procedures, sources said.

Yan, 56, will succeed Vice Chairman Jiang Yang, who currently oversees markets, initial public offerings (IPOs) and compliance departments at the CSRC. Jiang, who reached retirement age in September of 2106, has remained the post under the central government’s special approval because a successor hadn’t yet been picked.

The top leadership of the securities regulatory body includes Liu Shiyu, who became chairman in February of 2016, and three other vice chairmen in addition to Jiang: Li Chao, Fang Xinghai and Zhao Zhengping. Also in leadership is a discipline inspection chief Wang Huimin.

Yan, a financial regulation veteran, had spent decades in positions at the China Banking Regulatory Commission (CBRC) and the People’s Bank of China (PBOC). He was a vice chairman at the CBRC between May 2013 and December 2014 before he was appointed as vice mayor of Tianjin.

Born in Chongqing in 1961, Yan went to Southwestern University of Finance and Economics in Chengdu for his undergraduate and master’s degree. He got a Ph.D. in Economics from the People’s University of China.

He started his banking career in 1984 when he joined the PBOC’s Chongqing branch, where he rose to be vice president. He was then also appointed as the vice director at the Chongqing Branch of the State Administration of Foreign Exchange, the foreign-exchange regulator.

In 2002, Yan was promoted to the headquarters of the central bank in Beijing as the vice director of the banking regulation and supervision department. The next year, he was appointed to head the department overseeing state-owned banks at the newly established CBRC. While at the CBRC in the early 2000s, he oversaw the restructuring and initial public offerings of several major state-owned commercial banks. In 2007, he was transferred to Shanghai to head the CBRC’s branch in the city.

In 2011, Yan returned Beijing to be an assistant chairman at the CBRC, supervising joint-stock banks and city commercial banks. Two years later, he was appointed as a vice chairman of the banking commission.

As a senior banking regulator, Yan has called for better coordination among financial regulators to monitor risks that spill over from one sector to another as financial markets become increasingly interconnected. He has also warned of threats posed by lax oversight of bank wealth-management products and called for expanded financing sources for small businesses.

Yan’s career in Tianjin was closely tied to the pilot Tianjin Free Trade Zone, the first free trade zone in northern China, which was officially approved by the State Council in March of 2015.

As the deputy mayor of Tianjin, Yan was in charge of establishing the free-trade zone, which now covers an area of 119.9 square kilometers. He was a strong advocate for innovation during the establishment of the Tianjin Free Trade Zone, calling for financial innovation and greater market access to be tested out there.

Yan has on different occasions pledged an open approach to the development of the financial sector in Tianjin, highlighting the need to create a sound business environment for investors and draw a clear boundary between government and market power.

Yan has been applauded for his openness and pragmatism. A Tianjin government official told Caixin that Yan led the work designing Tianjin’s roles in financial reforms related to Tianjin Free Trade Zone and Beijing-Tianjin-Hebei regional development. “He has laid a solid foundation for the city’s future development,” the official said.