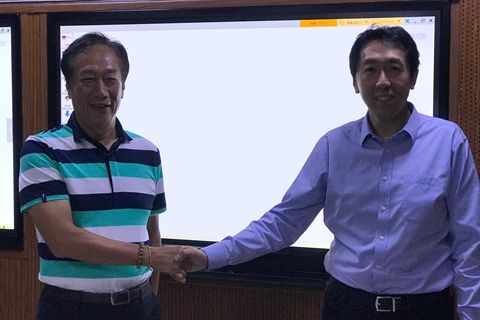 Ng, a Stanford University professor and a computer scientist who has become a superstar in artificial intelligence and machine learning, said on Thursday that his new mission is Landing.ai, a startup that will look for ways to apply AI to manufacturing.

“Landing.ai will help companies transform for the AI era. We’re starting with the manufacturing industry,” Ng wrote on his twitter account.

Ng has said AI will be as broadly transformative on industries and society as electricity. He has looked to AI to shake up education, automobiles and mental health. Now he wants to apply its power to blast manufacturing into a new era.

Ng, 41, could be the most active scientist-turned-entrepreneur searching for ways to tap business opportunities from the AI revolution. In 2011, Ng helped found Google Brain, Google’s best-known machine learning project. Google Brain has been heralded for its ability to mimic the human brain and train itself to recognize things like cats simply by watching YouTube videos.

He was also a lead founder of Coursera, the world’s largest open online educational platform. In 2014, he joined Chinese online search giant Baidu Inc. as its chief scientist and led the company’s push into AI. He also launched deeplearning.ai, which teaches AI specialization and real-world application, and sits on the boards of startups Drive.ai, which is creating AI software for self-driving vehicles, and Woebot, an automated “therapist” who helps improve users’ moods.

His resignation from Baidu in March sparked much speculation on what arena he would next take on.

Since July, Landing.ai has partnered with several manufacturing companies in the Chinese mainland, Taiwan and Japan to promote AI technology in factories. Moving forward, the company will look for opportunities to expand business into the logistics sector, Ng said.

AI has been broadly adopted in the IT industry. But Ng says it is more important to use AI to transform non-IT industries, such as manufacturing, transportation and health care to fully take advantage of its power.

In manufacturing, for example, hundreds of workers in a factory can study parts coming off assembly lines to identify defects for quality control. But such labor-intensive work can be replaced by the AI-powered automated detection system, Ng explained.

AI, which can exert more precise control than humans, can be used in operating machines, such as molding equipment, Ng said. Meanwhile, AI solution will also help factories succeed in handling challenges in production-line design, capacity management, and coordination to boost production.

The top challenge facing manufacturers in their AI transformation efforts is a talent deficit, Ng said, adding that even IT companies are finding it tough to recruit enough qualified AI professionals.

Ng’s Landing.ai currently has 20 people on its team and wants to expand, he said.

In order for AI to serve the manufacturing sector, massive amounts of data will have to be collected to help machines learn, Ng said. For example, an AI system will need hundreds of thousands of defect samples for it to be smart enough to control quality. But in practice, the defect samples gathered may not be enough for what is needed to teach machines, he said.

The AI boom has improved many aspects of people’s lives, but has also triggered concern over how it may impact jobs, with human workers being replaced by robot workers.

Ng doesn’t share this worry. He says that as AI revolutionizes manufacturing, it will create higher-level, better paying jobs. Large-scale training or retraining will be needed to teach today’s manufacturing workers how to perform these more advanced tasks, he added.

To back up his optimism, he points to the industrial era: The automobile replaced the horse and carriage, but created new jobs like taxi driver and truck driver. “The solution is to train more people to adapt to the automobile industry, rather than make more people ride horses,” Ng said.