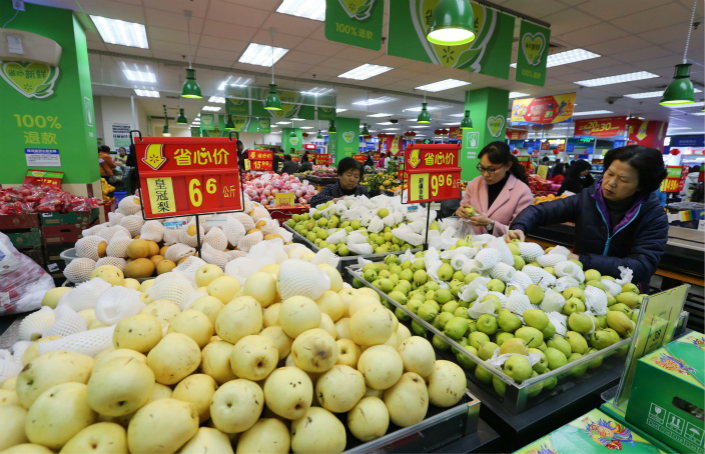 The four have established the Blockchain Food Safety Alliance, which allows companies to share information that is then stored by blockchain — encouraging accountability and giving suppliers, regulators and consumers greater insight and transparency into how food is handled from the farm to the table.

Blockchain, which originally emerged as part of the digital currency bitcoin, has been found to support a wide range of applications. A blockchain is a series of linked records, or blocks, on which it is virtually impossible to add, remove or change data. It’s now applied to sectors such as payment and supply-chain tracking.

China already has a national food tracking platform that collects data from provincial systems. The information is coded into bar codes that are attached to the products. However, the quality of the records can be uneven due to complex and fragmented data sharing systems that are often paper-based and can be error-prone.

Food safety is an issue worldwide, with almost 1 out of every 10 people falling ill after eating contaminated food and 420,000 dying every year from doing so, according to the World Health Organization. The issue is especially a concern in China, after incidents including the melamine milk powder scandal and toxic soy sauce have hurt consumers.

In the latest collaboration among the four, IBM will provide its blockchain expertise while Tsinghua University will act as a technical adviser, sharing its key technologies and knowledge of the China food safety ecosystem. Walmart and JD.com will help optimize and roll out the technology to suppliers and retailers that join the alliance, according to a joint statement on Thursday.

IBM already supplies blockchain food safety tracking systems to global food giants, including Walmart, Nestle and Unilever. A recent test in Walmart showed that applying blockchain reduced the time it took to trace a package of mangoes from the farm to the store from days or weeks to two seconds.

But some don’t see blockchain as capable and secure enough to handle complex data.

“Even the most established blockchain — the one used for bitcoin — can only process five to eight transactions a second,” and “it's still a new technology, with no standardized implementation. Lawmakers will need time to resolve questions about liability and other legal issues,” according to a June report by Goldman Sachs.