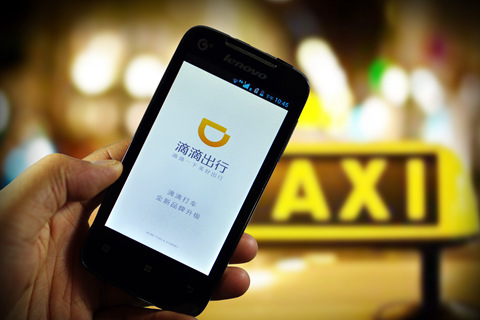 Didi is moving to tap businesses beyond ride hailing such as food delivery and internet finance. Photo: Visual China

Didi, an industry behemoth that claims nearly 90% of China’s ride-hailing market, was valued at around $56 billion after the latest fundraising, compared with about $50 billion in the previous funding round in April. Didi was created by a 2015 merger between Tencent Holding-backed Didi Dache and Alibaba Group Holding-backed Kuaidi Dache.

Didi said capital from the latest fundraising will be used to boost its artificial intelligence capacity, overseas expansion and new-energy vehicle service networks.

The company in April raised $5.5 billion from a consortium of investors. Softbank, as the leading investor, offered $5 billion. Other investors include China Merchants Bank, Bank of Communication and U.S. private equity fund Silver Lake Partner.

Company financing documents viewed by Caixin showed that before the April fundraising, messaging giant Tencent was the largest shareholder of Didi, with an 11.4% stake, followed by e-commerce firm Alibaba, with 9.5%. The company’s management team and employees held 8.4% and 10% of the company, respectively.

The two funding rounds this year have boosted Didi’s total fundraising to $25 billion, from a list of nearly 100 investors.

Didi’s ride-hailing business saw more than 10% growth in rides in 2017, according to a company source.

But the company is also facing pressure as authorities step up efforts to regulate the burgeoning ride-hailing business. Last year, a national law to legalize the industry set stricter requirements on companies and drivers. Local governments have also rolled out local rules. For instance, drivers must now be local residents with locally registered vehicles.

Meanwhile, smaller rivals are rising to challenge Didi’s dominance. Last month, ride-hailing and car-rental service provider Shouqi raised $105 million in new funds from a group led by Baidu Inc. and NIO Capital. Although much smaller in users base than Didi, Shouqi has established its foothold in the car-booking market that focuses on higher-end, more expensive chauffeur services.

Competition is also coming from outsiders who are eyeing the lucrative ride-hailing sector. In February, China’s largest group-buying and local service provider Meituan Dianping launched its own version of car-hailing services in Nanjing, capital of Jiangsu Province. Didi fought back by offering subsidies to drivers in the city.

Meituan-Dianping, which raised $4 billion in October, has planned to expand into the ride-hailing market for more than a year, a person close to the matter said. The company plans to develop ride-hailing into one of its major business pillars along with online shopping, reservation and hotel booking services.

Didi is also considering expanding its business spectrum beyond ride hailing. A source close to the company said Didi is set to launch food-delivery services early next year, joining the battle with Meituan-Dianping and Alibaba-backed Ele.me.

At the same time it is digging deeper at home, Didi has also geared up efforts to expand overseas. It said Thursday it will set up a partnership with Taiwanese company Ledi Technology Co., allowing the partner to use the Didi brand and platform in Taiwan.

In February, it set up an international division, announced planned launches in Japan and opened a research-and-development center in California.