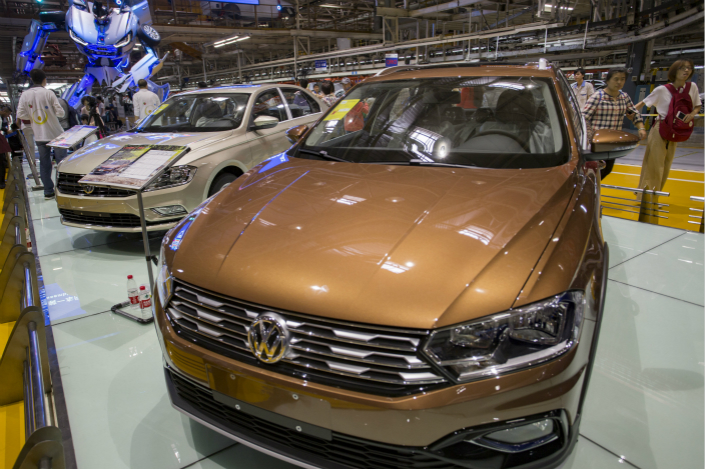 Volkswagen’s joint venture with Anhui Jianghuai Automobile will have to market electric vehicles under new, wholly owned marques, rather than any of the German carmaker’s existing brands. Photo: Visual China

Seat SA, the Spanish subsidiary of Volkswagen AG, will sell its China-made electric cars (EVs) under a different brand name in the country, sources familiar with the matter told Caixin.

The official establishment of Volkswagen’s third joint venture in China — announced on Friday — came more than a year after the German carmaker and Anhui Jianghuai Automobile (JAC) signed a memorandum of understanding in September 2016.

The Anhui province-based venture, with registered capital of 2 billion yuan ($304 million), will engage in auto production, sales and exports, as well as offer used-car trading and other transportation services, JAC said in a statement.

China in 2015 started issuing permits that allow companies to enter the auto market, as long as they exclusively produce EVs.

According to the rules regarding these permits, the Volkswagen-JAC joint venture — which obtained a permit in May — will have to market vehicles under new, wholly owned marques, rather than any of the German carmaker’s existing brands.

However, without this brand recognition, Volkswagen will enter China’s highly EV sector with no apparent advantage, competing against many domestic startups that have flooded into the industry to cash in on government subsidies.

The joint venture’s first EV will be an electric version of an existing JAC model, but its second and third EVs will be rebranded versions of vehicles made by Seat, a source close to JAC told Caixin.

An S-shaped logo was seen hanging inside the joint venture’s Hefei factor in November. The logo resembled the Seat logo, implying that the company aims to indirectly sell Seat vehicles to Chinese consumers.

Seat abandoned the Chinese market in 2014 due to sluggish sales.