By Luo Guoping and Liu Xiao 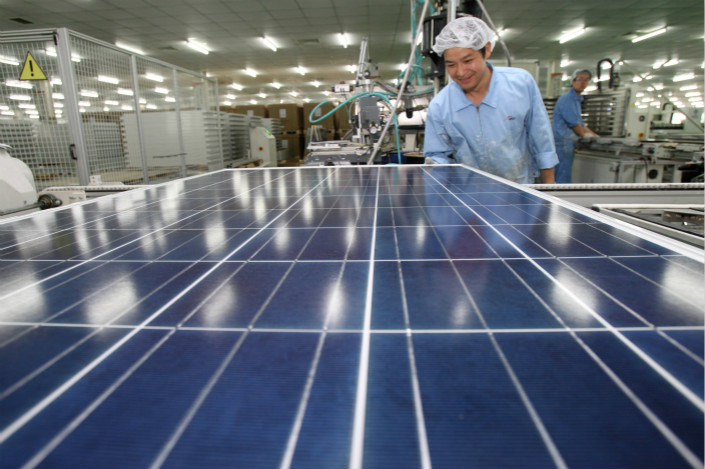 GCL-Poly is among the largest manufacturers of solar PV materials in the world. The company produced nearly 40,000 tons of polysilicon and 10.6GW of silicon wafers in the first half of the year, accounting for about one-quarter and one-third of global production respectively. Photo: Visual China

GCL-Poly, one of the world’s largest producers of photovoltaic (PV) materials — which convert light to electricity — said it had started discussions with potential investors for the possible spin-off of its polysilicon and silicon wafer production business in a stock exchange filing. It did not offer more details.

The move follows a number of Chinese solar firms leaving overseas markets to seek higher valuations at home. Valuations of solar firms listed in the U.S. have tumbled since 2015, as investors avoided the sector plagued by several high-profile restructurings and bankruptcies amid slim — and in many cases, no — profitability, while low oil and gas prices have slowed the switch from fossil fuel to solar.

Despite persistent pollution, China is powering ahead of many other countries on clean energy. Last year, China installed 34 gigawatts (GW) of new solar capacity, compared to the second-largest installer, the U.S., which installed 15 GW, according to a report from the U.S. Department of Energy released in April 2017. China’s accumulated solar capacity has reached 77 GW, far ahead of the 43 GW of Japan, the world’s second largest solar market, the report said.

Returning to the Chinese mainland capital market is in line with industry developments, a person familiar with GCL-Poly’s business told Caixin. The company’s financial performance has been strong in the past three years, but its price-to-earnings ratio was as low as 7 times, compared to ratios of 20 and 30 times for peers listed in the mainland, the person added.

The valuations for solar PV companies in the U.S. and Hong Kong are generally low and thus companies have lost their financing capacity, which is detrimental to their development and image, the person said.

In the early days of China’s solar PV industry development from 2004 to 2009, solar companies found intense interest overseas, raising hundreds of millions of dollars. According to a report from the Shenzhen Stock Exchange, 18 Chinese solar PV companies listed overseas compared with five on China’s domestic stock exchange, as of mid-2010.

An employee at Trina Solar told Caixin that when the company chose to list in the U.S., the main consideration was to expand its market share in Europe and North America. The industry has evolved since the company listed in 2006, the employee said. The Chinese capital market is interested in investing in leading enterprises in the industry, and thus it is in the firms’ strategic interest to return, the same person added.

Going private means abandoning the overseas platform and requires a substantial amount of capital to buy out the shares the company does not own. Trina Solar and JA Solar’s privatization plans cost $1.1 billion and $362 million respectively. If the spin-off and listing goes smoothly, GCL-Poly will have both A-share and H-share financing platforms, which would be a “relatively safe” move, an industry insider told Caixin.

GCL-Poly is among the largest manufacturers of solar PV materials in the world. The company produced nearly 40,000 tons of polysilicon and 10.6GW of silicon wafers in the first half of the year, accounting for about one-quarter and one-third of global production respectively.

Trina Solar and JA Solar and Canadian Solar Inc. are the world's leading providers of photovoltaic cells and modules.

In the past two years, the solar PV market has improved. Driven by favorable policies and cost reductions, with many industry players announcing expansion plans. Mid-stream enterprises are also trying to get involved in downstream power plants, increasing their demand for capital.

Canadian Solar, for example, has significantly expanded its production capacity of silicon wafers, batteries and modules in recent years while gradually getting involved in the downstream power station business. Production capacity has risen from 4.33GW at the end of 2015 to more than 8GW by the end of 2017, with an additional increase to 10GW planned for 2018.

An employee at Trina Solar told Caixin the company is actively seeking an A-share listing. But as regulators tighten their vetting process for IPO approvals, it remains to be seen if solar companies will get the go-ahead from authorities.