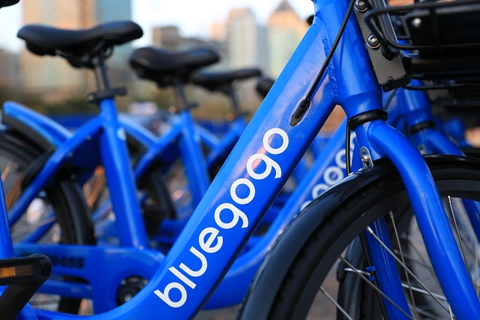 Bluegogo, one of dozens of bike-sharing startups that mushroomed in Chinese cities over the past few years, fell on hard times during a price war. Photo: Visual China

The two companies signed an agreement on the deal in late December, although the transaction hasn’t been completed, sources said. Bluegogo halted its business beginning Nov. 20, and most of its workers are gone.

Didi and Bluegogo didn’t respond to Caixin’s requests for comment.

Established in November 2016, Bluegogo is among dozens of bike-sharing startups that have mushroomed in Chinese cities over the past few years.

Riders are able to unlock a two wheeler with their smartphone, pay a small fee for their trip, and then park the bike essentially anywhere at their destination. Bluegogo operated in such major domestic cities as Shenzhen, Guangzhou, Nanjing, Chengdu and Beijing, according to company reports, and also expanded overseas to Los Angeles.

But in late 2017, the company was hit by a capital crunch amid fierce price wars in the industry. Some of Bluegogo’s customers said they had trouble getting their deposits refunded, and the company’s maintenance workers told Caixin that they hadn’t received paychecks since July.

Didi’s takeover of Bluegogo reflects the car-hailing giant’s longtime goal of expanding into the booming bike-sharing sector. In 2017, Didi participated in two rounds of fundraising for bike-sharing industry leader Ofo, becoming the top investor of Ofo with a 25% stake.

Caixin learned from sources that Didi has partnered with social media giant Tencent Holding, the largest shareholder of Ofo’s archrival Mobike, to push forward a merger between Ofo and Mobike.

Market analysts said a merger of Mobike and Ofo would end the cash-burning price war that has hurt both companies and allow some early investors to exit. Some analysts expect the bike-sharing industry will eventually go the way of the car-hailing industry, which initially experienced fierce competition but is now dominated by Didi Chuxing, which swallowed rivals Kuaidi and Uber China.

The merger would especially benefit Didi, which would control the users’ database and have access to information generated from the 40 million orders made by bike riders every day, an industry source said. Didi already handles 20 million daily car-hailing orders.

However, the merger plan led by Didi and Tencent has stalled due to opposition from both companies’ management teams. Since late November, a number of Ofo executives with links to Didi have left the company, underlining the tussle between the bike-sharing company and its largest shareholder.

Tech giants are competing to build footholds in the bike-sharing market in a bid to access more users. Alibaba has invested in two smaller bike-sharers, Hellobike and Youon Bike. A source close to Alibaba said the e-commerce giant is weighing whether to push forward a merger of Hellobike and Ofo, which would give Alibaba more muscle in the market than Tencent has via Mobike.