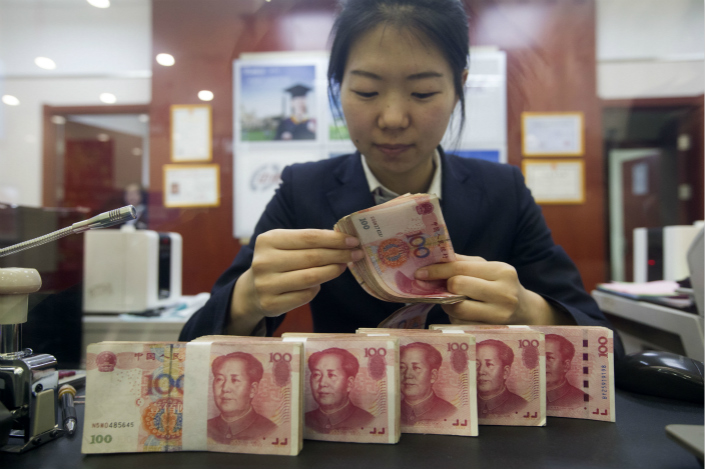 A Bloomberg News report that the People's Bank of China told banks to suspend the use of the "countercyclical factor" when calculating the yuan's daily reference rate triggered a sell-off of the Chinese currency on Tuesday. Photo: Visual China

China’s central bank isn’t saying whether it has changed the way it calculates the yuan’s daily reference rate. But based on the Chinese currency’s recent dive against the U.S. dollar, a lot of people believe it has.

The People’s Bank of China (PBOC), in a response to an emailed request from Caixin, neither confirmed nor denied that it had told banks to suspend the use of the “countercyclical factor” when they calculate the daily reference rate, as reported by Bloomberg News on Tuesday.

If true, the suspension would signal a change in how the central bank manages market expectations for the currency’s exchange rate, which until this week had been consistently strengthening against the U.S. dollar, analysts say.

“The window guidance of the PBOC this time might stem from concern that the yuan has appreciated too much,” said Zhong Zhengsheng, chairman and chief economist of CEBM Group, a subsidiary of Caixin Insight Group.

The Bloomberg report triggered a sell-off of the yuan late in the session on Tuesday. The onshore yuan slipped to a weekly low of 6.5207 against the dollar as of 4:30 p.m. on the day, marking its biggest intraday value drop in three months. Meanwhile, the yuan’s offshore rate fell more than 350 pips to below 6.53 per dollar.

“Many banks sold the yuan and bought U.S. dollars after the leak of the information,” a senior executive at the treasury department of a city commercial bank told Caixin.

The central bank introduced the countercyclical factor to the reference rate formula in May to reduce the impact of market forces on the yuan’s daily midpoint, from which the currency is only allowed to fluctuate by 2% against the dollar each day. At the time, the tweak was seen as a way to give the central bank more power to counter market forces that were betting that the currency would depreciate, analysts said.

The introduction of the factor had an effect. Last year, the onshore yuan strengthened nearly 6.8% against the dollar, completely offsetting the Chinese currency’s depreciation in 2016. Much of the gains occurred after the introduction of the countercyclical factor, in conjunction with government measures to prevent capital from leaving the country.

In its response to Caixin on Tuesday, the central bank reiterated that the banks can decide independently how to use the countercyclical factor.

Some banks that help set the yuan’s daily reference might have suspended the use of the factor, Caixin has learned.

The situation “might reflect the PBOC’s intention to guide the yuan weaker, as the yuan has continued to strengthen against the dollar after the countercyclical factor was introduced last year,” said the senior commercial bank executive.

But analysts say the central bank’s guidance did not mean China wanted to allow the yuan to depreciate or experience large fluctuations over the long term.

“The tweak in foreign exchange policy shows that the central bank has more confidence in letting the market decide the yuan’s rate,” said Liu Liu, an analyst at China International Capital Corp.

On Wednesday, the central bank set the yuan’s daily fixing rate at 6.5207 against the U.S. dollar, weaker by 239 pips from Tuesday’s rate. The onshore yuan closed at 6.5179 per dollar on Wednesday, stronger by 0.04% compared with the previous trading session.