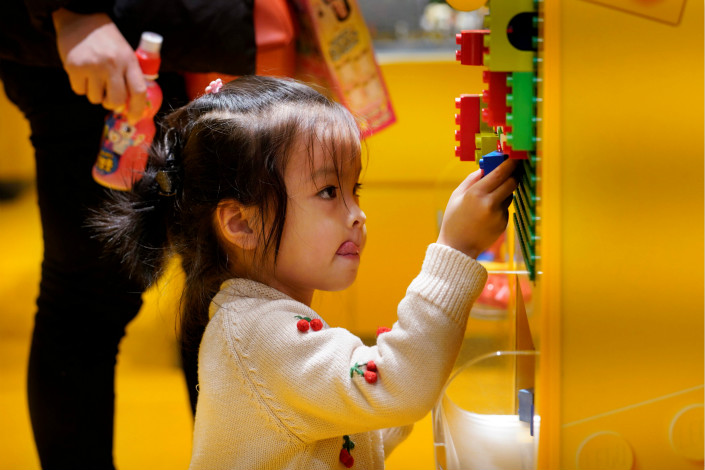 The Lego Group and Tencent Holdings Ltd. are stressing that the games, toys and cartoons they are jointly developing for Chinese children will be safe and wholesome. Above, a girl plays with Lego blocks in a Beijing store on Saturday. Photo: Visual China

The partnership for Lego could be especially lucrative in gaming, as its new partner is China’s second-largest game developer in terms of retail value, according to market research firm Euromonitor International.

Although Lego has launched several mobile games — most of which are free to play — it “has yet to find a major hit for the Lego brand name in this space,” said Euromonitor analyst Matthew Hudak.

“Much of the global mobile gaming growth for free-to-play games will come from emerging markets, where the Lego brand is not nearly as established,” Hudak said.

Perhaps seeking to placate protective parents, the companies have stressed that its products will be safe and wholesome for children.

Lego and Tencent will jointly develop games that “are suitable for kids and are positive, healthy and full of joy and imagination,” Tencent said in a statement (link in Chinese) Monday.

Tencent learned its lesson the hard way in this space. The company faced a backlash after its blockbuster game “Honour of Kings” became so successful it had to implement an “addiction prevention system” by restricting how long children could play. The Communist Party-run People’s Daily called the game “menacing.”

Lego and Tencent will also explore opportunities in other sectors, including an online system for “smart Lego toys” and a special page on Tencent’s video platform featuring cartoons and other child-friendly content.