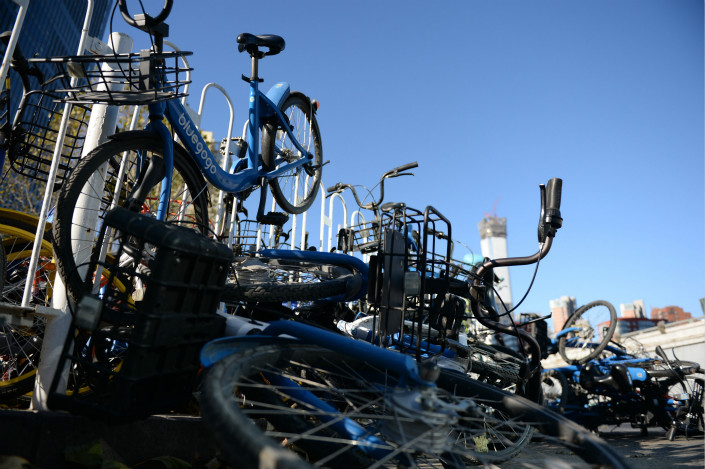 Bluegogo bicycles sit in a heap in Beijing on Nov. 30. The company, one of dozens of bike-sharing startups that have mushroomed in Chinese cities in recent years, was hit by a capital crunch late last year, with reports emerging that it owed its suppliers more than 200 million yuan ($31 million). Photo: IC

Just weeks after cash-strapped Bluegogo tied-up with the country’s largest car-hailing service, two of China’s largest cities have announced the bike-sharing startup was banned from operating on Didi’s platform.

On Friday, Shenzhen, followed by Guangzhou on Monday, announced that it would be “illegal” for Bluegogo, which just formed an alliance with car-hailing firm Didi Chuxing Technology Co. Ltd., to offer any of its services on the other firm’s platform until “it has dealt with the deposit and debt issue.”

Both cities said they have also banned Bluegogo from adding new bikes to the cities’ streets.

Established in November 2016, Bluegogo is among dozens of bike-sharing startups that have mushroomed in Chinese cities over the past few years. But in late 2017, the company was hit by a capital crunch amid a fierce price war in the industry. News broke that the company had failed to pay back more than 200 million yuan ($31 million) to suppliers, and reports emerged that most of its employees had been dismissed and its users were struggling to get back their deposits.

Earlier this month, Bluegogo reached an agreement with Didi that gave its users the option to convert Bluegogo deposits, privileges and app top-up values into Didi bike and car ride coupons of equivalent value on the car-hailing platform.

Didi’s move marked a detour for country’s car-hailing monopoly into the bike-sharing business, but the pair has yet to confirm an ownership tie-up, which was reported by Caixin earlier this month.

Bluegogo is among a wave of later arrivals that are either faltering or have gone out of business as they have struggled to find a stable customer base.

Bluegogo’s difficulties in Guangzhou and Shenzhen highlight Chinese regulators concerns about the embezzlement of deposits and the industry’s debt problems.

Last month, the China Consumers Association (CCA) issued warnings to Beijing-based Kuqi — a second-tier player — that it should cooperate with a government investigation after the consumer association received more than 2,000 complaints from users who reported difficulties getting their deposits back.

Such complaints have also been levied against the industry’s well-funded leaders Mobike and Ofo, which last month denied accusations of financial mismanagement amid reports that 6 billion yuan of user deposits has been spent on supporting their rapidly expanding businesses.

In China, there are no specific legal requirements for how bike-sharing companies should handle user deposits. But in August, an industry regulation jointly issued by several central government ministries said deposits should be put in special bank accounts and managed separately, without elaborating on how this would be enforced or what kind of punishments would be handed out to violators.