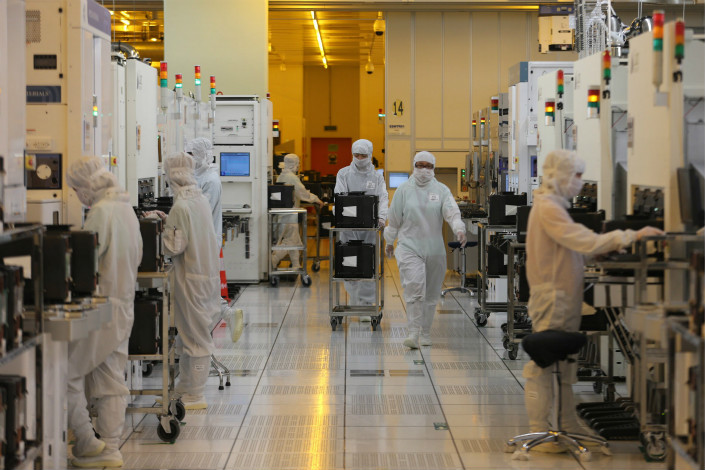 Chinese employees dressed in dust-proof clothing work at a SMIC wafer plant in Beijing in 2012. SMIC shares rose 1.3% in Wednesday trading in Hong Kong after the government investment was announced. Photo: IC

Leading Chinese chipmaker SMIC said it will sell a non-controlling stake in one of its newest plants to two government-backed investment funds for about $1.75 billion, taking advantage of state support as Beijing tries to build up the high-tech sector.

Semiconductor Manufacturing International Corp. (SMIC) said it would sell 27% of its SMSC unit to China IC Fund for $946.5 million, and 22.9% to Shanghai IC Fund for $800 million, respectively, according to an announcement to the Hong Kong stock exchange on Tuesday. SMIC and its SMIC Holdings affiliate will hold the remaining 50.1%, giving the Shanghai-based chip giant control of the plant.

As a result of the new investment and additional funds from SMIC, registered capital for the new plant, known in the industry as a fab, will jump from $210 million to $3.5 billion, SMIC said. It added its estimate that SMSC will eventually receive about $10.2 billion in investment.

“The 12-inch wafer fab will be built by joint venture partnership with China IC Fund and Shanghai IC Fund and the company could speed up the introduction of advanced manufacturing processes and products with the support of the government industry funds,” SMIC said. “This will also relieve the company from spending a large amount of cash investment and depreciation cost caused by the expansion of advanced production capacity.”

SMIC shares rose 1.3% in Wednesday trading in Hong Kong after the announcement came out.

China is one of the world’s largest consumers of high-tech microchips that run everything from smartphones to microwave ovens. But it has to import most of those from big global names like Qualcomm Inc. and Intel Corp. due to its own lack of cutting-edge technology.

To try to change that, Beijing has embarked on a major campaign to build up the domestic industry by providing financial and other support to plant builders. That campaign has resulted in plans for at least 17 new chip-making plants costing $110 billion in China over the next two years, according to research house TrendForce. The construction boom is likely to provide a boost for chip-making equipment suppliers, but could ultimately lead to a global supply glut.