By Leng Cheng and Wang Liwei 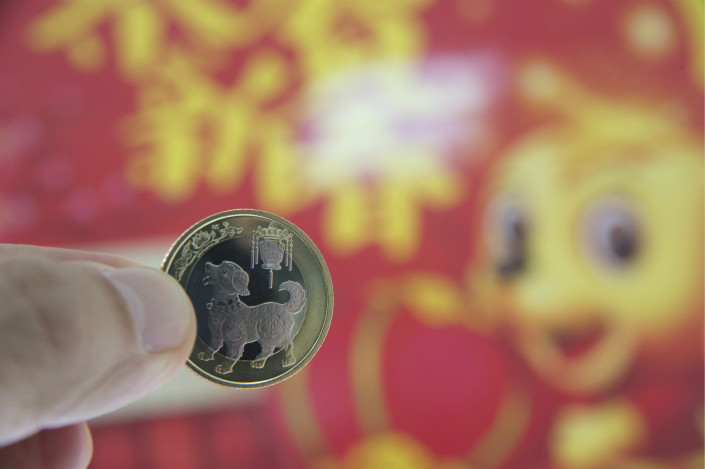 The Year of the Dog, could finally be the year that foreign companies eager for access to China’s financial markets get lucky. Photo: VCG

After years of lobbying by firms themselves and their governments, especially the U.S., 2018 could be the year they strike lucky — 18 is an auspicious number in Chinese: it sounds like the phrase “about to get rich.” It’s also the Year of the Dog, an animal that symbolizes good fortune for many Chinese.

President Xi Jinping’s top economic and financial adviser, Liu He, reassured foreign business and government leaders last week that the pledges made by the Chinese authorities in November to remove long-standing constraints on overseas financial institutions’ ownership of their China ventures will be implemented this year. Speaking at the World Economic Forum in Davos, Liu, who also sits on the 25-member Politburo, reiterated the leadership’s commitment to further opening-up measures in the banking, securities and insurance sectors.

“I would state in a responsible manner here, that we will implement these measures one by one this year, the earlier the better,” Liu said, although he did not give further details.

A key gripe of foreign financial services companies for years has been their inability to do business on their own in China — regulations have forced them into joint ventures where they don’t have control or are limited in the size of the stake they can hold, giving them less sway and say over operations. The Chinese authorities have been cautious about opening up the financial markets out of concern that domestic institutions were too weak to compete and that the financial sector was too immature and poorly regulated.

But over the past year, the government has signaled change is coming, amid growing confidence in the strength of domestic financial institutions and their ability to compete, and the recognition that foreign participation could do the same for China’s financial sector as it did for manufacturing after the country joined the World Trade Organization in 2001.

In December 2016, the Ministry of Commerce (MOFCOM) and the National Development and Reform Commission (NDRC) published draft foreign investment guidelines that would lift restrictions on credit investigation and ratings services.

Xi, in his speech to the World Economic Forum in January 2017, pledged that China would expand market access for foreign investors, and later that month the State Council, in its Document No. 5, promised to loosen restrictions on foreign access to banking and financial institutions, securities companies, securities investment and fund management companies, futures companies, insurance agencies and intermediaries.

In November 2017, as U.S. President Donald Trump was flying out of Beijing after a state visit, Vice Minister of Finance Zhu Guangyao announced plans to relax foreign ownership rules on banks, securities and asset management companies and insurers. The government will raise the cap on direct or indirect foreign ownership of securities companies, fund management companies and futures companies to 51% from 49% currently and will abolish the limit entirely three years after the rules come into force.

But the changes go deeper than ownership. For example, in December, the China Banking Regulatory Commission said foreign banks will be given more access to the yuan-denominated retail banking and bond business.

Market opening to foreign financial institutions has been moving forward for some time. The China Securities Regulatory Commission (CSRC) and Asset Management Association of China (AMAC) began accepting applications from wholly foreign-owned firms for a private fund manager license in mid-2016 and has so far awarded 10. But that’s a drop in the ocean compared with the 22,883 domestic private fund managers whose registrations have been approved by regulators since 2014.

The impending ownership changes have prompted many foreign financial companies to start making preparations. Some are getting out of their existing joint ventures to pave the way to go it alone. Global ratings agency Fitch Ratings Inc. said on Monday that it had sold its 49% equity stake in China Lianhe Credit Rating Co., purchased in 2007, to GIC, Singapore’s sovereign wealth fund. Although Fitch has not commented on its plans, the announcement triggered speculation the sale was part of a strategy to set up a wholly owned subsidiary.

“The changes in the regulatory landscape provide an opportunity for us to consider and evaluate how we can best serve the needs of local and global capital markets going forward,” a Fitch Ratings spokesperson said in a response to a query from Caixin.

U.S. financial services giant Morgan Stanley has signaled a desire to increase its stake in its local joint venture, Morgan Stanley Huaxin Securities Co., from 49% to 51% while Japanese financial holding company Nomura Holdings told Japanese media on Jan. 4 that it plans to establish a retail and wholesale brokerage in China that will be “similar to Japan’s Nomura Securities Co”, its securities and investment banking arm.

Societe Generale SA, France’s second biggest lender by assets is studying the possibility of setting up a securities joint venture in China following November’s announcement. Several other players who already have a China presence through joint ventures, such as Swiss banking giants UBS Group and Credit Suisse AG are waiting for the authorities’ nod to raise their stakes in their ventures to 51%.

UBS Group currently has about 25% of UBS Securities Co., its joint venture with four Chinese state-owned enterprises. Credit Suisse owns 33% of Credit Suisse Founder Securities, the first Sino-foreign securities joint venture. The company was set up in 2008 and offered sponsoring and underwriting of A-shares and government and corporate bonds, but it was only in 2015 that the venture was given approval to conduct securities brokerage activities, and only then in the Qianhai Zone, a financial services hub in Shenzhen.

There are currently 10 joint venture brokerages in China out of a of total 129 securities firms. In the first six months of 2017, seven of the joint ventures generated a combined 5.7 billion yuan of revenue and 1.4 billion yuan of profit, accounting for only 4.12% of total industry revenue and 2.39% of profits, according to data compiled by the state-backed Securities Daily newspaper in September.

Given the slow pace of opening up market access so far, many foreign financial companies are treading cautiously, learning from the experience of foreign banks’ efforts to expand in China and aware that growing their businesses in the country will be a slow multiyear process.

China cracked open the banking industry to foreign investors when it joined the World Trade Organization in 2001, allowing them to buy stakes in domestic lenders. But it capped holdings of single investors at 20% and allowed a maximum total foreign holding in any one bank at 25%. At the end of 2006, the government allowed foreign banks to set up locally incorporated subsidiaries to conduct yuan retail business.

Data from the banking regulator show that there were 210 foreign banking institutions in China as of November 2017, and at the end of 2016, foreign banks held 2.9 trillion yuan of assets in China, a measly 1.3% of total banking assets. That was the lowest share since 2003 and down from 2.4% in 2006.

“When we look at the Chinese market, we must remain modest” with regard to expansion, Didier Valet, deputy chief executive officer of Societe Generale, told Caixin in a January interview. The focus will be on the securities investment and brokerage businesses rather than banking, he said, given the difficulties of competing with local giants who have long dominated the market, such as Bank of China and China Construction Bank.

An analyst at an international securities firm said foreign companies aren’t likely to offer much competition for domestic brokerages. Joint ventures are slower to change their investment strategies in response to changes in the market, and have double the compliance requirements to meet – those of their home countries in addition to Chinese rules.

But the daunting challenges of competing with Chinese companies hasn’t put off some of the world’s biggest asset management companies, attracted by the prospect of huge growth in the world’s most populous nation as incomes rise and consumers have more money to save.

By 2027, Chinese investors will have $12.3 trillion of assets under management, both domestic and overseas, rising to $17.1 trillion in 2030, up from $3.2 trillion in 2017, according to estimates from Casey Quirk, a consultancy that advises investment managers on their business strategies. In a report released in November, the company said that in 2030 China will be the second-largest asset management market in the world, behind only the U.S.

Fidelity International has been among the most active foreign players in China so far in terms of issuing funds. It has launched three products — an onshore private fund investing in equities and two onshore funds investing in bonds, targeting institutional investors and high net worth individuals.

UBS Group, Switzerland’s largest bank by assets, has already been expanding its wealth management operations in China and set up a branch in Shanghai in 2016 to service affluent mainland clients.

“The reason is clear,” Sergio P. Ermotti, UBS Group’s chief executive, said in a keynote speech at the firm’s annual forum in Shanghai on Jan. 8. “Take wealth creation in China. We expect the wealth of Chinese billionaires to overtake the U.S. some time in the next decade. At the same time China’s affluent segment is forecast to grow at around 13% per annum over the next 5 years as the middle class grows and becomes wealthier.”

Edmund Koh, head of UBS Wealth Management Asia Pacific told Caixin that the main drivers of the company’s earnings in China in 2016 and 2017 were the strong performance of the equity market and the growth in wealth managed on behalf of high net worth individuals.

Some foreign investment managers are also eyeing a share of China’s nascent private pension market and are hoping they will be allowed to manage some of the country’s state pension funds.

The National Council for Social Security Fund (NCSSF) oversees a strategic reserve fund used to supplement the social security spending of local governments and also invests a portion of the pension funds of provincial governments on their behalf. In 2016, the NCSSF chose 14 domestic fund management companies, six insurers and one brokerage firm to manage pension fund money invested in the country’s stock market.

“Pension fund management is in our DNA,” Daisy Ho, managing director of Fidelity International Asia ex-Japan, said at a media briefing on Jan. 18. “We are actively talking with regulators to see what kind of expertise we can offer to help the development of China’s pension system.”