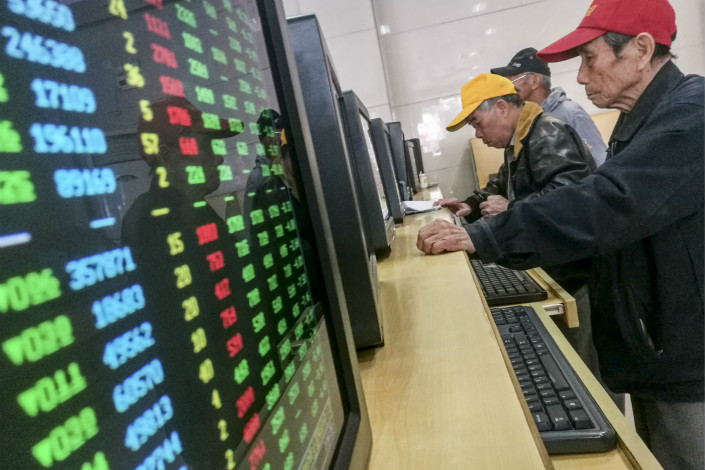 Many companies, including China’s largest scallop producer Zeneco Group Co., suspended their shares from trading after issuing profit warnings. On Wednesday, the company estimated it would take an unexpected loss because a large portion of its scallop stock had been wiped out. Photo: VCG

(Beijing) — Chinese mainland stocks had their worst week in 14 months, as market sentiment was dented by profit warnings for small caps, as well as sell-offs triggered by renewed concerns over tighter regulations for trusts.

The Shanghai Composite Index, which closed higher on Friday, fell 2.7% to 3,462.08 this week, notching the index’s largest weekly loss since Dec. 16, 2016. The Shenzhen Component Index, the home of many small to midsize high-tech firms, slid 5.74% over the week, while its start-up board ChiNext plunged 6.3%.

Investors continuously dumped small caps over the course of the week as a slew of small companies announced unexpected shortfalls in their earnings forecasts. These drops then triggered forced selling by shareholders of small firms who had pledged shares as collateral for loans from banks or brokerages.

“The plunge in share prices did raise the risk of margin calls, but the fundamental reason (for the drop) lies in the deceleration in earnings growth,” a fund manager told Caixin.

Many companies, including China’s largest scallop producer Zeneco Group Co., suspended their shares from trading after issuing profit warnings. On Wednesday, the company estimated it would take an unexpected loss of 530 million yuan ($84.16 million) to 720 million yuan in 2017 because a large portion of its scallop stock had been wiped out.

Pledged shares account for about 5% of the main board’s value, and as much as 20% of the value of the ChiNext, Everbright Securities Co. said in an earlier report. The situation suggests that mainland small caps will come under additional selling pressure if share prices continue to fall.

The broad bearish sentiment was further exacerbated by fresh expectations of tighter regulations on risky investment by trusts, as shares of some companies with trusts as their major shareholders fell by daily limit of 10% — even though there were no drastic changes in their earnings forecasts.

As the country’s financial regulators have shown determination to reduce leverage in the financial system by drafting new rules on asset management products, some trusts that have made leveraged bets on stocks have been unloading shares to shore up their liquidity, analysts said.

The drop in mainland stocks came after a recent run-up in share prices. The Shanghai index began the year with 7.6% gain through Jan. 25, when it hit a 25-month high.

“The short-term mood has been overexcited, while risks need to be priced in,” said Hong Hao, chief strategist and head of research at Bocom International. “Any story could be a bad story at the moment, and could become the catalyst for a correction.”