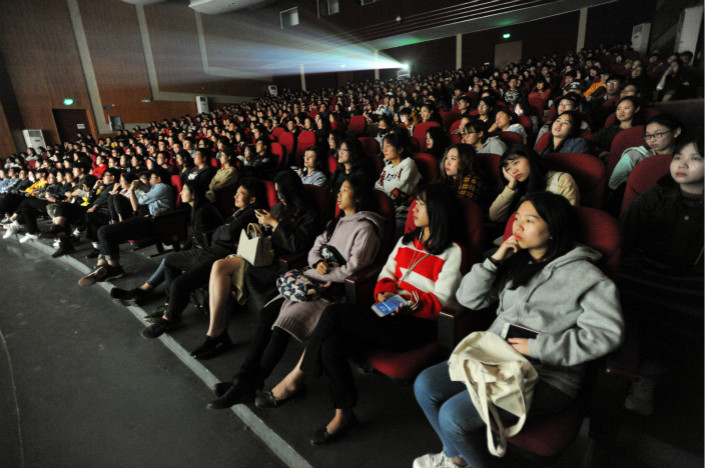 Moviegoers watch a film in Wuhan, Hebei province on Oct. 25. In 2017, about 6% of the movie industsy's annual revenue was earned over the week-long Lunar New Year holiday, which was actually down from 8% the previous year. Photo: VCG

As the Lunar New Year holiday approaches, Chinese people around the country are preparing to enjoy some leisure time with their families.

But the country’s film industry is not relaxing, as the holiday season is its busiest. Scheduled for release are 11 major films that have investments from over 100 film and television companies.

Ding Daoshi, film critic and head of research at internet industry social platform sootoo.com, told Caixin that “Spring Festival has been the most important season for the movie industry since 2016, as the ticket sales exceed those of any other Chinese holiday.”

In 2017, about 6% of this revenue was earned over the weeklong Lunar New Year holiday, down from 8% the previous year.

However, things may be different this year, as the government body charged with regulating the film industry has introduced new rules to curb the use of subsidies to cut the price of tickets — a practice some say has stymied competition in the industry and lowered the quality of its output. The rules include a minimum ticket price and a cap on the number of subsidized tickets per release.

Data released by UNESCO’s Institute of Statistics in 2016 shows that the average price for a movie ticket in China is 36.7 yuan. However, as online ticket-buying has become the norm, many tickets are sold for less than 10 yuan due to subsidies.

The subsidies are a marketing tool used by film studios, distributors and online platforms to fill seats during competitive periods. The companies pay for part of the cost of the ticket, which is set by the distributor and the cinema.

Wang Zhonglei, CEO of multinational Chinese entertainment company Huayi Brothers Media Corp., told news portal huxiu.com last year that while subsidies accounted for about 15% of the companies’ annual operational budget in 2016, this had risen to about 33% in 2017, most of which was spent over the Lunar New Year holiday.

Media reported that about 300 million yuan was spent on just one day of ticket subsidies for just four films during the 2017 holiday. Wanda Film Holding Co. Ltd. President Zeng Maojun told news website sohu.com that almost a tenth of the ticket revenue taken in by Chinese cinemas in 2015 came from subsidies.

Film industry analyst Liu Jia told ikanchai.com that “these ticket wars have become a competition of capital, not of quality,” as the amount of money spent on subsidizing tickets is the main determiner of whether a film will garner a large audience.

Liu also said that as more and more money is spent on these subsidies, movies backed by companies unable to afford this hugely expensive competition are struggling to find an audience.

Lu Jianmin, known for his work on the hugely successful “Wolf Warrior” action films, told the Global Times that “Spring Festival is undoubtedly the time we can make the most money. However, the ticket subsidies are unfair for small-budget movies. Regardless of whether the film is good or not, it is hard for them to compete.”

To create a more level field, the State Film Bureau has set the minimum ticket price at 19.9 yuan, including the subsidy, for Feb. 15 to March 2. Also, only 500,000 tickets can be subsidized per release.

Ding, the film critic, said, “In recent years there has been a bubble in the China movie market, partly due to the large ticket subsidies handed out since 2015. This has enticed a lot of people to buy tickets to films, even if the film is of poor quality, which has disrupted the healthy development of the industry. The new policy is expected to be an effective way of managing this bubble.”

However, for the upcoming holiday, bigger films seem to still be on top. According to real-time data provided by online ticketing platform Tianpiaopiao, 94% of film reservations for the first day of the holiday have gone to just three films, each of which had hundreds of millions of yuan of investment.

Ding said, “Since those three movies, based on an existing intellectual property, were already popular before, they still rank at the top. However in the long term, we can achieve the desired effect by limiting the number of ticket subsidy through policies and allowing movies to compete with quality, not just with capital.”