Sanya-Beijing Flights Cost as Much as $3,940 During Chinese New Year. Here’s Why 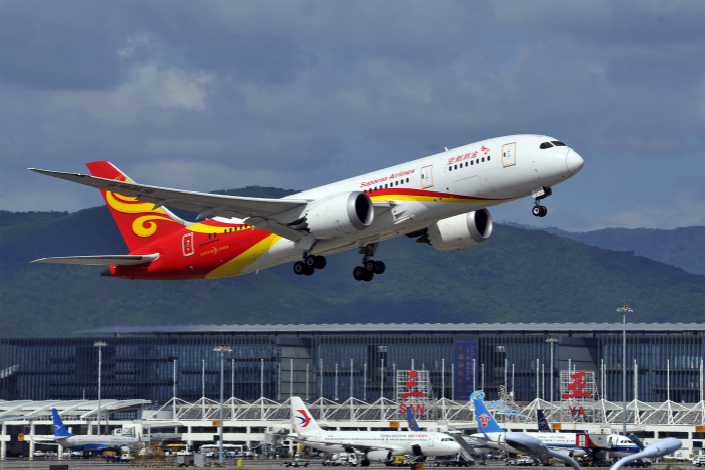 A Suparna Airlines jetliner takes off from Sanya Phoenix International Airport on Dec. 15. The loosening of ticket-pricing policy and the strong demand for air travel has given the airlines the confidence to put out undiscounted tickets at specific times.. Photo: VCG

As the Chinese New Year holiday season draws to a close, a discussion about “sky-high air fares” has flooded the internet. According to articles circulating online, flights from South China’s resort city of Sanya, Hainan province, to the country’s capital of Beijing cost as much as 25,000 yuan ($3,940), while flights from Hainan’s capital, Haikou, also were ludicrously expensive. The airline industry was accused of “slaughtering” travelers during the peak season. Is that really the case?

Take the Feb. 24 flights between Sanya and Beijing as an example. A popular flight-booking app shows that there are no tickets for direct flights available on this route. However, there are nine multistop flights that required layovers in Northeast China’s Harbin, Northwest China’s Xi’an, or Urumqi, capital of the Xinjiang Uygur autonomous region. The fares for these flights are all over 10,000 yuan, with some as high as 25,000 yuan. The prices are indeed unaffordable for the average passenger. However, all ticketing apps clearly indicate that the aforementioned tickets are first class or business class.

Unlike economy class, which must adhere to government price controls, the market sets the prices for first-class and business-class tickets. In April 2010, the Civil Aviation Authority of China and the National Development and Reform Commission (NDRC) jointly issued a circular making it clear that airlines can decide first-class and business-class fares on their own, provided they report the prices 30 days in advance to the Civil Aviation Administration and the NDRC for the record. Before that, the prices for both classes were limited to 150% of the price of an economy-class ticket.

Air travel is becoming more popular, driven by a rise in consumer spending. The Ministry of Transport earlier released data showing that the total number of passengers transported via rail, road, water and air across the country dropped by 3.24% in the first two weeks before the Lunar New Year holiday. But among the modes of transportation, commercial air travel has maintained a high rate of growth, rising 9.63% year-on-year.

The loosening of policy and the strong demand has given the airlines the confidence to put out undiscounted tickets at specific times.

Hainan is an island province, so flights are the easiest way to get there. During the peak season, it’s inevitable that there will be a shortage of economy-class tickets. An airline industry insider told Caixin that it is normal for there to be a transportation crunch during the Spring Festival, and airlines usually apply for maximum capacity on popular routes because of their profitability.

Although economy-class prices for most airlines in China are still restricted by the government, that is likely to change in April. On Jan. 5, the Civil Aviation Administration and the NDRC issued a circular that expanded the range of routes that qualified for market pricing. The number of routes will rise to 306 and will include popular routes between major cities like Beijing, Shanghai, Guangzhou, Haikou and Sanya.

As stipulated in the notice, airlines can adjust the price of up to 15% of the routes whose prices have changed from the previous season, though the full fare for each route can rise no more than 10%. The situation indicates that the economy-class fare of the above route is likely to rise as well.

Previously, domestic air prices were based on the air transport price reform program put forth by the Civil Aviation Administration in 2004, when the NDRC and the administration jointly determined the baseline price and the range of changes. On this basis, airlines were allowed to adjust the prices on only a few routes based on with supply and demand.

In 2013, authorities issued another document to remove the bottom limit of airline tickets on domestic routes, setting only an upper limit.

“For airlines, limiting the price of flights during peak seasons and golden hours will hurt airlines’ profit margins. With increasing competition in the civil aviation sector that results in frequent price wars, the real price of fares has been falling over the past few years, and industry earnings have slipped,” an analyst told Caixin.

It is not yet clear whether all of the 306 routes will be subject to price increases.

“Deciding whether to raise prices or how much to raise prices will be based on the market competition situation for each route,” said one airline executive. “But for China as a whole, the average fare should rise considerably.”

If one adds in the 724 routes that have already been opened to market pricing, the total number of domestic routes with market-based pricing plans have grown to more than 1,000. Because the newly opened routes include many popular routes, the significance is huge. According to an estimate by Industrial Securities, the routes account for 55% of the industry’s flight capacity.

The Beijing-Hangzhou route, which has had market pricing since October 2013, is a classic example. In the beginning, this route was unpopular. But with Hangzhou’s growing economic power, ticket prices have risen on the route. The full fare for an economy class ticket from Beijing to the eastern Chinese city now costs more than 2,000 yuan, while the fare for the route between Beijing and Shanghai, which is close in range and location, is only 1,240 yuan due to government price restrictions. There is a lot of room for price increases, especially for routes between major cities, according to several brokerage analysts interviewed by Caixin, who added that prices of popular routes could continue to rise over the next few seasons.

Because of the expectation of prices increase, the stock prices of China’s three biggest airlines have risen over the past four months, led by Air China. Its shares have jumped by more than 40% since October.

Huang Rong is a reporter with Caixin Media.