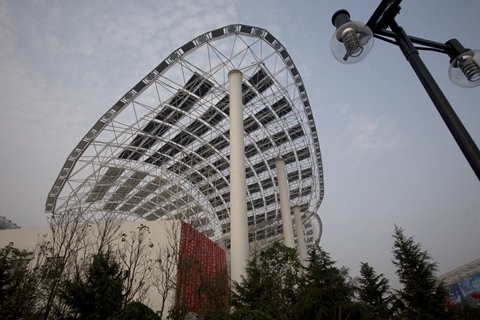 A prominent solar entrepreneur excoriated local authorities of an eastern China city for allegedly breaking a promise of land in exchange for the billions of yuan his company invested in a massive government-led construction project in 2010.

Huang Ming, founder and chairman of Himin Solar Energy Group, criticized the government of Dezhou city in Shandong province for its failure to resolve a years-long dispute on an agreed land deal with his company. Huang posted a statement expressing his frustration on Feb. 14 on WeChat, a popular social media platform in China.

In the strongly worded post which was later deleted, Huang accused Chen Yong, the party secretary of Dezhou, of “indolence and neglect of duties” for not fulfilling the government’s promise.

According to Huang, in exchange for Himin’s investment in the city’s massive construction for the 2010 International Solar Cities Congress, Dezhou officials promised the company plots of land for commercial development. But the deal has never been completed.

The Solar Cities Congress was held in the Solar Valley of Dezhou, which Himin has developed as China’s largest solar power demonstration area.

Huang said in a statement that under the “order” of the Dezhou government, Himin spent over 1 billion yuan ($158 million) and borrowed another 2 billion yuan to build the congress facilities and revamp a nearby village.

Huang added that the hotel and convention center built and operated by Himin as part of the Solar Cities Congress project were built without completed land documents, instead using a special government permit. The Dezhou government has since refused to help Himin obtain necessary documents despite repeated requests, which has hindered Himin’s plans to transfer the assets for cash.

Established in 1996, Himin was a leading player in China’s solar energy sector. A Himin executive said the company’s growth slowed after 2010 and has stalled since 2012, with the unresolved Solar Cities land deal exacerbating its losses.

Himin was also hit by fierce competition from smaller rivals that have emerged since 2010 under the state’s supportive policies. Between 2008 and 2012, Himin shelved plans to go public three times, partly due to concerns over its asset quality.

The Dezhou government on Monday responded in a statement that it has held meetings with Huang and pledged to solve the dispute in a “pragmatic and lawful manner.”

Part of the challenge in resolving the deal is the surging price of land in Dezhou. According to a Dezhou land bureau official, the price of the land plots Himin asked for has increased by four times as of 2017.

The official told Caixin that the city government has held several talks with Himin over the compensation but failed to reach an agreement on the price of the land. Moreover, Himin has been unable to provide the original documents regarding the land deal, said the official.

Himin declined Caixin’s request to view the documents related to its investment agreements with the 2010 Dezhou government administrators.

The official said that because the 2010 project was launched in a rush, the previous administration was unable to complete many required assessments such as security and environmental impacts. This has made it difficult for the current administration to issue supplemental documents to the projects as Himin requested.

“If Himin can’t provide enough proof documents, no department can take the responsibility to (help it) complete the procedure,” said the official.

This is the second time in two months that a private businessman used social media to make a high-profile complaint about local authorities. In early January, the government of the Northeast China province of Heilongjiang apologized to a ski resort operator after its owner, Mao Zhenhua, publicly accused a local government body of grabbing land and interfering with his business.