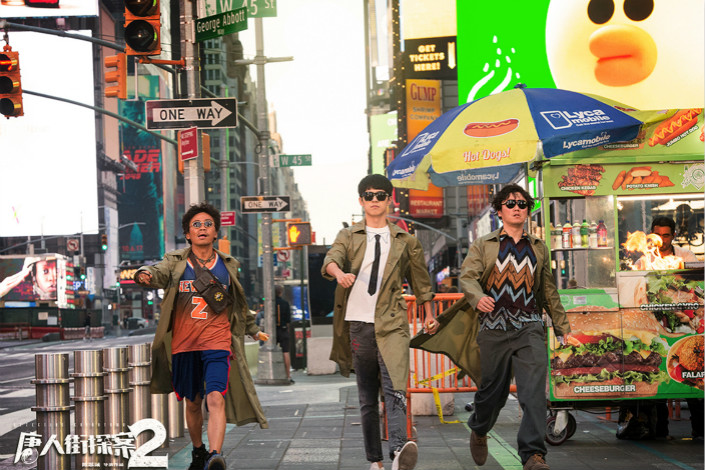 The crime movie “Chinatown Detective 2” is one of the blockbusters that helped break China’s monthly box office record during the Lunar New Year holiday. Photo: VCG

China’s movie theaters have smashed the monthly box office record for a single market, taking in 10 billion yuan ($1.6 billion) in February, thanks to the success of domestic blockbusters during the week-long Lunar New Year holiday last month.

The data, released by the country’s top film authority on Thursday, has beat the record of nearly $1.4 billion set in the North American market in July 2011, according to U.S. film tracking site Box Office Mojo.

The movie mania was caused by the rapidly growing number of cinemas in the country and the release of several high-quality blockbusters over the holiday that were backed by massive marketing campaigns, said Wu Jian, an independent film industry analyst who previously worked for domestic box office tracker Maoyan.

The weeklong Lunar New Year holiday, which ended on Feb. 21 this year, is the biggest holiday of the year and sees hundreds of millions of people leave China’s big cities and head back to their hometowns to reunite with their families.

In the past, this pattern of migration meant the holiday wasn’t a particularly lucrative time for cinemas, as many smaller cities lacked theaters, but things have since changed, Wu said.

There were more than 9,900 theaters with over 53,000 screens in total in the country by the end of February, half which were in smaller towns and counties, according to a report by Guotai Junan Securities.

In the past, movie screens were filled with Hollywood blockbusters over the holidays, such as James Cameron’s fantasy film “Avatar” in 2010 and Disney’s musical animation “Frozen” in 2014. However, foreign film releases have become scarce in this period in recent years.

The top three hits in February were crime flick “Detective Chinatown 2,” action film “Operation Red Sea” and comedy adventure “Monster Hunt 2,” which were all made in China and debuted on the first day of the Year of the Dog.

It is an unwritten rule that foreign films should avoid the hyper-competitive holiday season, and moreover Hollywood usually doesn’t release blockbusters in February anyway, Wu said.

Strong growth is expected to continue in the sector in March, when a series of U.S. hits are coming to China, including “Three Billboards Outside Ebbing, Missouri,” “Black Panther,” and “The Shape of Water,” said media and communication analyst Tao Ye from Caitong Securities.