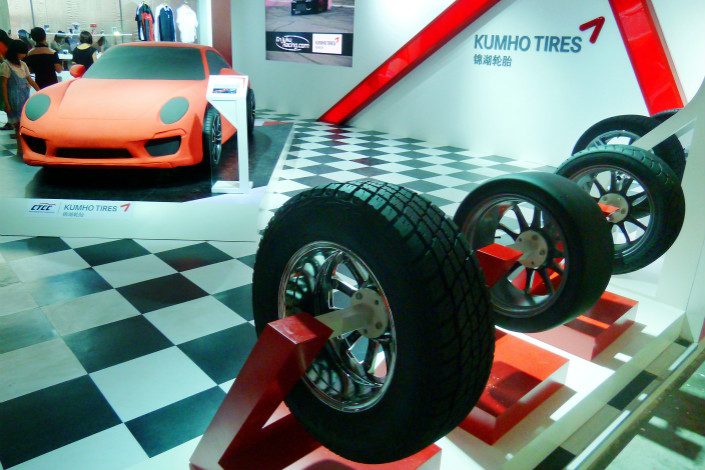 After a previous failed attempt, Chinese tire-maker Doublestar has agreed to acquire a controlling stake in cash-strapped South Korean peer Kumho Tire, at a slimmed-down price. But protests from Kumho’s workers union continue.

The revised deal, valued at 5,000 won per share, is a bargain compared with an agreement a year ago that would have allowed the Chinese company to hold a 42.1% stake in Kumho for 955 billion won, or 14,389 won per share.

After the initial deal was announced in March 2017, Kumho employees protested, fearing layoffs. At the same time, former owner Kumho Asiana Group said that it wanted to buy back the firm.

Meanwhile, political and commercial sentiment between China and South Korea was souring over Beijing’s opposition to Seoul hosting a U.S. anti-missile system.

Then in September, the Chinese side said the deal had fallen apart, with no reason given.

In November, Kumho Asiana Group chairman Park Sam-koo said he had no intention of buying back Kumho Tire, which gave creditors full authority to work on rescue plans for the country’s second-largest tire-maker.

The second attempt by creditors to sell to Doublestar again aroused protests from Kumho's workers union, which staged a sit-in protest on Friday, saying it feared a leak of core technologies, massive layoffs and a negative impact on the local economy, the Korea Times reported Sunday.

Kumho hit a branding crisis in 2011 when China’s state-run broadcaster CCTV published an expose saying that the manufacturer used substandard rubber in its products. Its sales declined from 2012 to 2015 when the company began losing money.

The Doublestar agreement is the latest in a string of Chinese acquisitions of foreign tire manufacturers. In 2015, China National Chemical Corp. agreed to buy Italy’s Pirelli, the world's fifth-largest tire-maker, for around 7.1 billion euros ($8.7 billion).