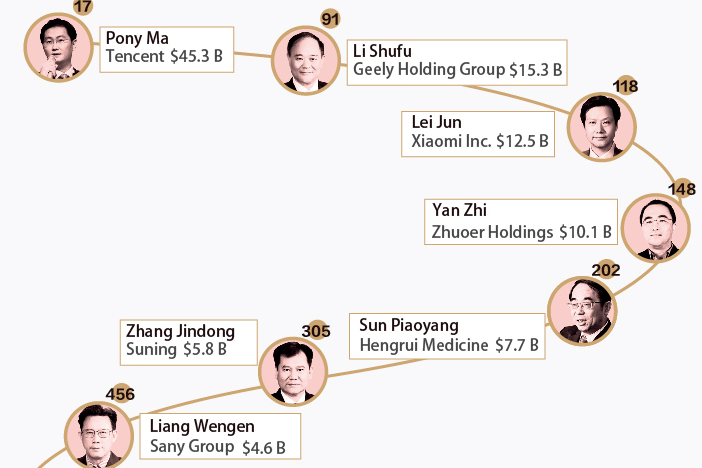 Some of the richest people in China, 29 of whom made it onto the latest Forbes World’s Billionaires List, are lawmakers now attending the annual meeting of the nation’s top legislature.

Pony Ma Huateng, chairman and CEO of internet giant Tencent Holdings Ltd. and now the wealthiest person in Asia, has been present at the National People’s Congress every year since 2013, except for the 2014 session, which he missed due to health issues.

This year, Pony Ma repeated his 2017 proposal to establish a “digital China” in which the internet and technology does not only involve businesses, but also benefits the people’s livelihood and governance.

Pony Ma said that blockchain technology is a great innovation, but Tencent will not enter the risky cryptocurrency industry, the most well-known application of blockchain.

Pony Ma also suggested making it easier for professionals to relocate, with the goal of boosting the development of the Guangdong-Hong Kong-Macau Bay Area, a Chinese government project to connect Hong Kong and Macau with several southern mainland cities including Shenzhen, where Tencent is based.

Unlike Pony Ma, China’s No.2 billionaire, Jack Ma, the founder and executive chairman of e-commerce giant Alibaba Group Holding Ltd., has never been elected as a delegate to the annual political gathering of around 3,000 delegates.

Other important figures from the business community in attendance at the legislative meeting included Lei Jun, chairman and CEO of phone-maker Xiaomi Inc., a firm now planning an initial public offering and a launch in the U.S. as early as later this year; and Li Shufu, chairman of Chinese automaker and Volvo-parent Geely, who recently acquired a 9.69% stake in German carmaker Daimler AG.

Lei’s proposal to the legislature encouraged the government to allow more privately owned companies to take part in the Belt and Road initiative, a national program to invest in infrastructure along the ancient land-based and maritime Silk Roads.

He said that in the past few years, private companies have made greater losses than state-owned ones during global expansion.

Li’s suggestions concerned the emerging ride-hailing industry. He suggested that the insurance regulator and insurers should design a new transport insurance package that can better protect and regulate drivers who use their private cars to transport customers.

While not all of China’s billionaires are lawmakers, some of them are part of the Chinese People’s Political Consultative Conference (CPPCC), a body that advises the government on a range of issues.

Ding advised that a family’s spending on education and health care could be deducted from their income taxes.

Li, whose Baidu is listed on the Nasdaq, said the company could come back to a domestic stock exchange, if possible. China’s securities regulator is researching ways to make it easier for high-valued tech giants to trade their shares at home.