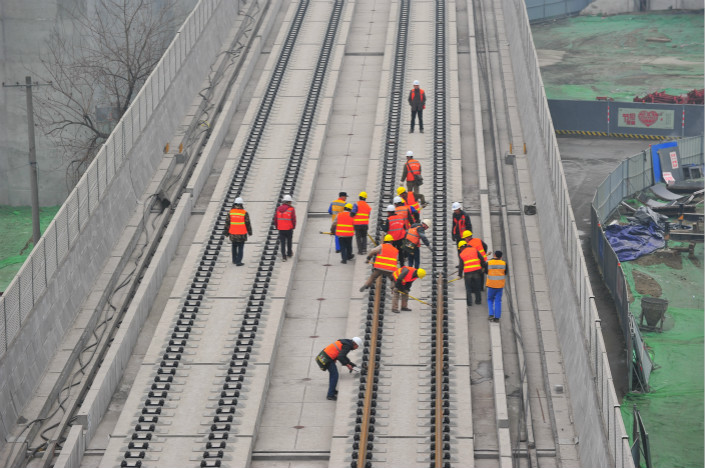 Construction takes place on the Chengdu-Pujiang section of the Sichuan-Tibet Railway in Chengdu, Sichuan province, on Jan. 30. China Railway Corp. General Manager Lu Dongfu said reduced spending on rail development doesn’t mean the government is reducing its support for the industry, as some have said. Photo: VCG

China Railway Corp. (CRC) General Manager Lu Dongfu said lower spending doesn’t mean the government is reducing its support for the industry, as some have said.

The operator said in January it plans to spend 732 billion yuan ($115.6 billion) this year on its fixed rail assets, the lowest amount since 2013. CRC had promised earlier to not invest less than 800 million yuan every year to develop China’s railway. But the figure has steadily dropped from 808.8 billion yuan in 2014 to 801 billion yuan last year.

During a discussion panel of the annual legislative session on Tuesday, Lu said that despite a lower budget in the next few years, the total investment between 2016 and 2020 still fits well into the 3.5-trillion-yuan target earmarked in the central government’s 13th Five-Year Plan.

Infrastructure spending — including in the railway sector — has long been a key impetus of China’s economic growth over the last few decades.

Although China has been moving toward a more services- and consumer-driven development model, overall investment is still expected to account for 33% of China’s GDP growth in 2018, the National Development and Reform Commission said on Tuesday.

To keep the momentum growing, China’s rail sector has been aggressively marketing its state-of-the-art bullet-train technology abroad in recent years. But it has yet to see much success in its bidding for contracts in Asia and North America amid geopolitical concerns and fierce rivalry from well-established Japanese and German players.

In June 2016, a deal signed between a Chinese consortium and a rail company in the U.S. state of Nevada to build a high-speed rail line was scrapped by the American partner due to what analysts blamed on regulatory hurdles.

However, CRC recently won a deal to build a light railway project in Tel Aviv, Israel, and continues its bid for projects in Malaysia and Singapore, among other markets.