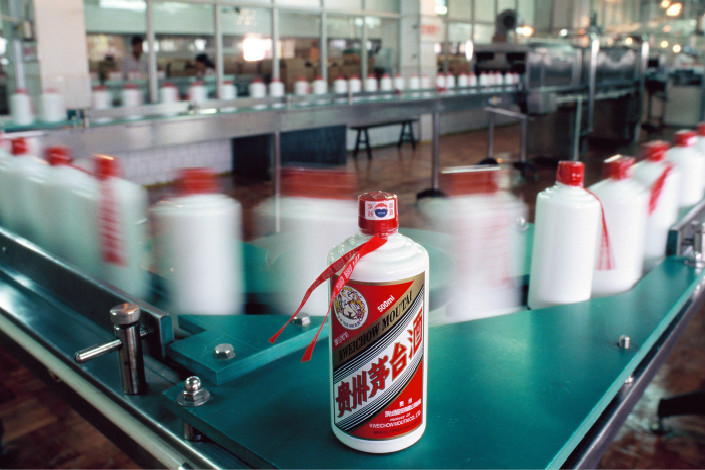 Moutai is bottled at the company's distillery in Renhuai, Guizhou province. Photo: VCG

The world’s largest spirits-maker has not swayed from its commitment to crack down on counterfeits and protect the environment, a company executive told Caixin— but he admitted results so far remain modest.

Deputy manager of the Kweichow Moutai Group, Zhang Deqin, told Caixin on the sidelines of China’s ongoing annual legislative meeting — to which he is a delegate — that he has submitted proposals to the National People’s Congress advocating efforts to tackle both intellectual property and environment protection.

Kweichow Moutai emerged as the world’s most valuable liquor-maker after its share price doubled in 2017. But its renowned alcohol brand has had to battle fake Moutai imposters in the market for years.

Zhang said the group employs an enormous team and capital to crack down on counterfeit products, but the “results are modest.”

The solution should come from a united effort from the government, consumers and the media, Zhang said.

Moutai spends at least 50 million yuan ($8 million) each year to tackle pollution along the Chishui River, a major tributary of the upper Yangtze River that supplies Moutai factories, but the work should be shared with the neighboring regions as well, Zhang said.

The following is an excerpt from Caixin’s interview with Zhang.

Caixin: Moutai has had problems with counterfeits for more than a decade. How can the situation be improved?

Zhang: Moutai allocates a huge staff and capital to crack down on forged spirits every year. For example, the Xijiu brand alone spends tens of millions of yuan on it, assigning more than a hundred employees across the country. But the results are modest.

The work requires joint efforts. Laws on intellectual property should be improved, consumer awareness must be raised, and the media is also responsible. Some media organizations endorse counterfeits just to get their advertisement money. Regulators should be stricter. Some government officials, greedy for bribes, have offered shelter for fake products, which does no good for the protection of intellectual property.

Moutai produced 42,000 metric tons of liquor last year, accounting for roughly 0.3% of the entire industry. Is the counterfeit issue partly due to the fact that Moutai’s supply is so limited?

No. It is not because of the supply volume, nor is it because the profit from forging Moutai liquor is large. There are even faked farm products, such as eggs. Consumers aren’t sufficiently aware of the issue, and the counterfeiters are shameless.

What suggestions did you make to the congress with regards to environmental protection?

The Chishui River, where our production is based, plays an important role in the ecosystem of the Yangtze River basin. Moutai’s production facilities cover an area of 15 square kilometers (5.8 square miles) along the river, and we are strict with our operations. The company spends at least 50 million yuan each year to tackle local pollution, such as planting trees along the banks and educating farmers about applying organic fertilizer.

But we want neighboring Yunnan and Sichuan provinces, together with Guizhou province (where Moutai is based) to work together.

Several state-owned liquor-makers have conducted mixed-ownership reform that will allow more shareholders from the private sector. What is Moutai’s plan?

The subsidiaries that don’t run the core brands such as Moutai have already started the reform.