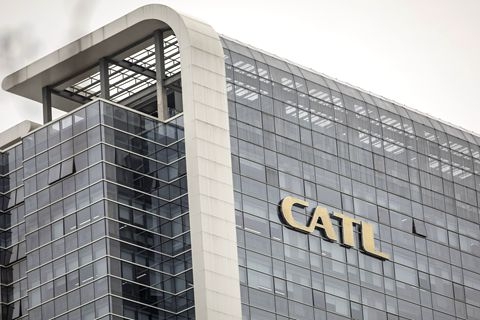 CATL, which filed its IPO application with the securities regulator in November, updated its application status earlier this week, indicating the completion of the first stage of what can be a long review process. CATL is the first of eight companies that filed its IPO on the same day to update its status.

Shenwan Hongyuan Securities said in a report that the earlier-than-expected update indicated an acceleration of the review of CATL’s IPO.

A person close to CATL told Caixin that the company planned to debut in the middle of this year. “It seems that the listing will come sooner based on the current pace,” said the person.

Several investment bank sources said they expect CATL to become the next company to enjoy the expedited IPO review as regulators encourage leading companies from the emerging sectors to float in the domestic market.

Earlier this month, Foxconn Industrial Internet, a unit of the world's largest contract electronics manufacturer Hon Hai Precision Industry Co., also known as Foxconn, received its IPO approval in just 36 days — a breathtaking pace compared to the process taken by most companies, which often lasts one to two years.

Caixin reported earlier that the China Securities Regulatory Commission (CSRC) has been working on measures to streamline its IPO review to entice the country’s tech startups and giants to trade their shares at home, in an effort to invigorate the domestic capital markets and boost the new economy sector.

The CSRC has told securities brokerages to support companies from sectors such as artificial intelligence, advanced manufacturing, biotech and cloud computing to list in the domestic market, Caixin has learned.

According to CATL’s prospectus, the company plans to issue 217 million shares to raise 13.1 billion yuan ($2 billion) at China’s Nasdaq-style ChiNext board in Shenzhen, using the funds to build a battery-cell plant second only in size to Tesla Inc.’s Gigafactory in the U.S.

The IPO would value the company at $20 billion, making CATL the largest company on the ChiNext board.

Established in 2011, CATL sells batteries for cars, buses, and logistics vehicles. It is now the supplier of leading carmakers including BMW and Daimler. In early March, Volkswagen Group said it had picked CATL to supply batteries for its new electric vehicle project.

CATL has recently bought a controlling stake in North American Lithium — a lithium project in Canada — to expand its access to raw material supplies.

The mine is expected to produce 23,000 tons of battery-grade lithium carbonate every year.