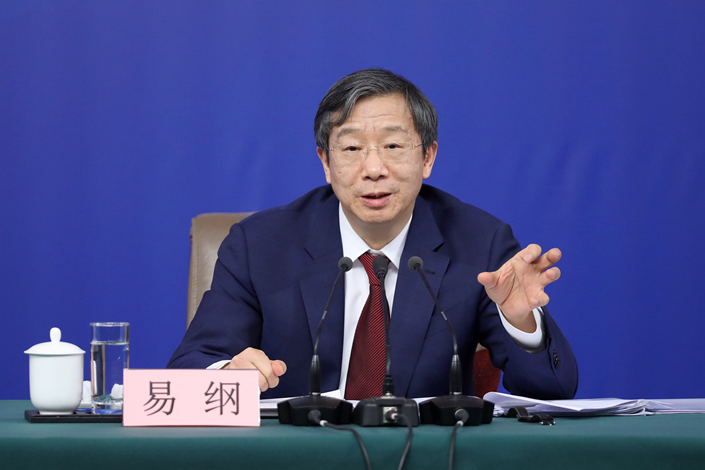 Yi Gang at a press conference on the sidelines of the National People's Congress on March 9. Photo: VCG

Yi Gang, deputy governor of the People’s Bank of China (PBOC), has been named the new head of the central bank, succeeding Zhou Xiaochuan, who has retired after more than 15 years in the post — the longest in the PBOC’s history.

“I feel peaceful and solemn as my mission is sacred and honorable,” Yi told reporters at the sideline of the ongoing session of China’s legislature. “I will certainly fulfill my duty in according with the oath I’m going to make.”

The appointment was officially announced on Monday at the plenary meeting of the National People’s Congress. A high-ranking PBOC official since 1997, Yi listened to his appointment while sitting in a back seat on the second floor of the Great Hall of the People.

Market participants believe that Yi’s appointment signaled continuity and stability of the central bank policy, Caixin has learned. Yi’s first comments to the media after his appointment confirmed that view.

“We shall implement a moderate monetary policy, pushing forward financial reform and opening-up at the same time as maintaining the stability of the finance industry,” Yi told reporters. “You will see a slew of reform and opening-up policies coming out from the this day on till the start of the Bo’ao Forum in Hainan province" in April.

Born in March 1958 in Beijing, Yi built his career as a scholar and has a solid academic background in macroeconomics.

In August 1994, Yi co-founded the China Center for Economic Research, the predecessor of Peking University’s National School of Development, one of the country’s top think tanks on economic affairs. His research included explaining China’s economic boom from the perspective of changes in money supply; predicting and offering advice for policy responses to China’s deflation in 1998 following the Asian financial crisis; and explaining how to improve the allocation of China’s financial assets.

His in-depth research into monetary policy and practical policy recommendations gained the attention of policymakers, so much so that he was invited to join the PBOC in 1997. He became secretary-general of the PBOC’s Monetary Policy Committee in 2002, took the leading role in the reform of rural financial institutions in 2004, and was appointed deputy governor of the central bank in December 2007.

He was head of the State Administration of Foreign Exchange for more than six years from 2009, where he was in charge of issues including the reform of China’s foreign exchange system and diversification of investments of the country's growing foreign exchange reserves.

Yi’s reputation as an advocate of market-oriented reform has been growing since then. In an exclusive 2013 interview with Caixin’s then-editor-in-chief, Hu Shuli, Yi said that when it comes to issues including foreign exchange, the interest rate or how foreign reserves are invested, the key to taking steps toward reform is to believe in the market’s logic and to let the market play a crucial role in guiding reform.

Yi added in the interview that the best supervisory path involves giving more freedom to businesses and individuals while protecting China's economy and financial security. At every step of reform, Yi said he encourages the use of pilot projects with a precondition that every experiment has to involve a practice that's theoretically feasible.

In 2014, Yi was made deputy director of the General Office for Central Leading Group for Finance and Economics, a key economic policy-making body, working with Liu He, the top economic adviser of President Xi Jinping. Yi is now also an alternate member of the 19th Central Committee of the Communist Party of China.

In addition to monetary and financial policies, Yi was involved in the research and design of the reform of China’s social security system at its early stage and was a strong advocate of helping the poor. As early as 2002, he also called on the government to pay more attention to factors other than just the economic growth rate, suggesting authorities take into account employment, environment and the non-performing loan ratio at banks in addition to gross domestic product in their assessment of local officials’ performance.

Caixin learned from sources that Yi was described by a top Chinese leader as “an expert of the U.S. economy and financial system” at a recent internal meeting, a sign that his work at the central bank has been recognized by the country's leadership.

Yi has a solid pro-market record and should be able to communicate well with international markets, so market participants have welcomed his appointment, said Ether Yin, a Beijing-based partner at advisory firm Trivium China. However, Yi will probably face a more political role than he's been used to as vice governor, Yin added, and his pro-market tendencies may be watered down as he tries to get other parties on board with his policies.

“Yi’s two main challenges will be striking a balance between financial de-risking and avoiding a credit crunch, and finding ways to lobby for his agenda within the system as he takes on a more political role,” Yin told Caixin.

China’s central bank is now facing multiple challenges as it aims to cultivate a proper monetary environment to help China to shift its economic focus from high-speed growth to high-quality growth, while also giving consideration to both financial reform and opening-up and risk prevention at the same time.

Yi's main priority will be increasing support for the real economy as money supply growth slows, said Zhu Chaoping, global market strategist at JP Morgan’s asset management division. In this he will receive plenty of support from the highest levels, Zhu said, as Yi's views are the same as those of Vice Premier Liu He, Xi's chief economic adviser, who has also stressed that the financial sector should not just serve its own interests. Yi will also be helped by PBOC's more influential position after the recent government overhaul, Zhu told Caixin.

The PBOC will likely ensure more resources given to targeted areas of the real economy by decreasing their financing costs, said Zhu — areas such as infrastructure in underdeveloped areas, transportation, and high-tech industries. Real estate and financial services will likely be pressured with increased financing costs. Yi will likely show much more caution on exchange rate liberalization, balancing it with yuan stability concerns, Zhu told Caixin.

Yi reflected on the cause of U.S.’ sub-prime mortgage crisis in a 2008 article, suggesting that the “monetary authorities should be in search of an effective approach to prevent the spread of crisis and the moral hazard, and in the meantime ensure the market's price discovery and market clearing functions are at their maximum efficiency.”