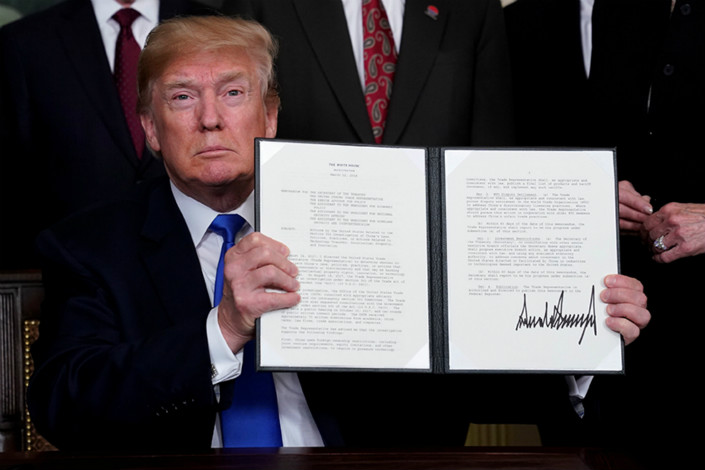 Both Chinese and U.S. stocks plunged in response to increasing trade tensions between China and the U.S., as Beijing unveiled a reprisal list Friday morning targeting $3 billion in U.S. imports, coming shortly after Trump’s decision to slap punitive new tariffs on up to $60 billion of Chinese goods.

Trump signed Thursday’s memorandum, which is likely to target Chinese exports in the high-tech and communication industries, after an investigation by the U.S. under the rarely used Section 301 of the 1974 Trade Act identified alleged misappropriation of intellectual property by China.

Here are some analyst reactions about the looming Sino-U.S. trade tension that Caixin has collected.

“The economic impact on both China and the U.S. will be determined by what form the tariffs end up taking. The effects are likely to be felt more strongly in the U.S. and increase both consumer and producer prices. “

“Exports are extremely important to the Chinese economy, but have been trending less so in recent years and the U.S. has been shrinking as a share of China’s export market.”

“The tariffs announced today will cause difficulties for some firms exporting from China but will have a barely perceptible impact on China’s wider economy.”

“The degree to which the tariffs weaken demand for Chinese imports depends on which products are chosen. In many sectors there are few alternative suppliers that US buyers could switch to.”

He suspects that the loss to China from these tariffs is likely to come to no more than 0.1% of GDP.

“Among the imports expected to be targeted by punitive tariffs are information and communication technology (ICT) products, which are presumed to have benefited from intellectual property theft.

“As a preliminary matter, it's important to note that most exports of ICT products from China contain more non-Chinese value than Chinese value,” he said.

The non-Chinese inputs, which include materials, labor and research and development for ICT products, account for more than half of the value of U.S. ICT imports from China.

Japanese, Korean, Singaporean, German and many American companies on the supply chain will be hurt by U.S. tariffs on Chinese ICTs, he said.

“I fear that the world will focus their ire on U.S. protectionism rather than unfair Chinese trade practices.”

She suggested that a better route to action would be to work with other countries who share Washington’s concerns and to respond in a way that does not violate World Trade Organization obligations.

“China’s enlarging trade surplus with the U.S. in the last year is the top reason for the trade frictions between the two countries.”

Although it’s difficult to predict to what extent the two parties will engage in a trade war, they will not escalate it unlimitedly. Based on past experience, a Sino-US trade war may start with general trade sectors, followed by escalations in the manufacturing and high-tech sectors.

He said the root cause of the China-U.S. trade surplus is global governance in the new era, as globalization has started to fray.

Tu Xinquan, director of the China Institute for WTO Studies, University of International Business and Economics

“From the previous experience, a 301 investigation is a tool for deterrence. Its purpose is to scare you, then the U.S. gets what (it) wants.”