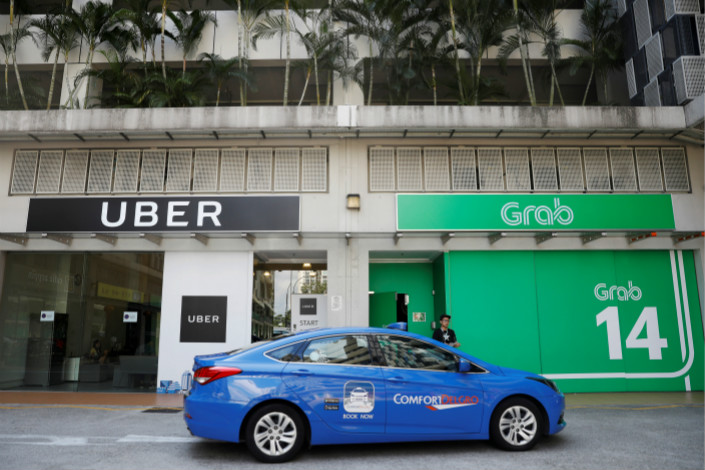 A ComfortDelGro Corp. taxi drives by the offices of Uber and Grab in Singapore on Monday. Photo: VCG

Uber will sell its ride-share and food delivery businesses in the region for a 27.5% stake in Grab, the Singapore-based firm said in a statement Monday. The value of the deal has not been made public.

The agreement is expected to further secure Grab — which now operates in 195 cities across eight Southeast Asian countries — as the region’s undisputed leader in the car-hailing business.

The deal represents another major retreat from international markets for Uber, following its withdrawal from China in 2016 and Russia in 2017. The California-based Uber sold its business in China in return for an approximate 20% stake in Chinese rival Didi Chuxing, ending years of intense competition that sparked a slew of price wars.

The latest deal with Grab means Uber is joining Didi and Japan’s SoftBank Group Corp. as one of Grab’s largest investors.

Market watchers said Uber’s surrender in Southeast Asia — one of the world’s fastest-growing economies with over 600 million people — could be a boon to Didi, as it has been gearing up for an international expansion.

Didi acquired Brazilian peer 99 for an unpublished value in January, posing a direct challenge to Uber’s business in the market.