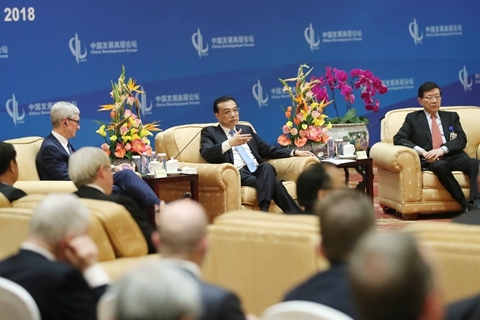 Premier Li Keqiang has promised that China will not force foreign companies investing in China to transfer technology.

The issue has been one of the justifications that the Trump administration has used for the tariffs it has threatened to impose on Chinese goods, a move that has ratcheted up the chances of a trade war between the world’s two largest economies.

Li made the comments, along with a vow to continue to open China’s markets, during a meeting on Monday with foreign executives and academics attending the three-day China Development Forum in Beijing.

The premier also said that China welcomes foreign companies to take part in “Made in China 2025,” a government plan to retool the country’s manufacturing industry. Li promised that domestic and foreign companies will be treated equally and added that China will strengthen its protection of intellectual property rights.

He reiterated that “there is no winner in a trade war” — a line he had emphasized during the closing meeting of the National People’s Congress, the country’s legislature.

Trade tensions between China and the U.S. appeared to have eased on foreign media reports that the two parties have secretively engaged in discussions to address the trade imbalance.

In response to a question about the waste ban at a regular press briefing on Monday, Hua Chunying, spokesperson at the Ministry of Foreign Affairs, called the U.S. request unreasonable. Hua added that the waste ban is an important measure to protect China’s environment and the health of its people.