By Huang Rong and Bonnie Cao 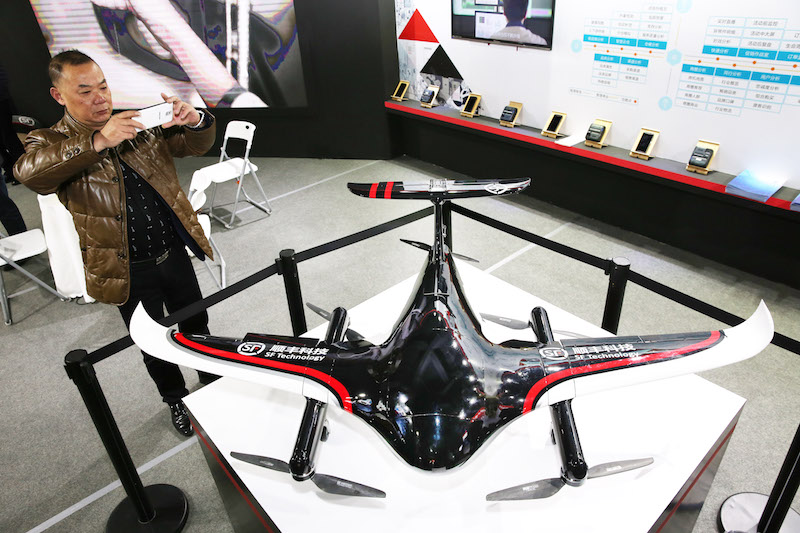 SF Express has a plan in which its drones — like this model on exhibit in 2017 — could deliver parcels to every corner of China within 36 hours. Photo: VCG

Chinese consumers already have it good with flying-fast delivery service. Soon deliveries could be even faster, after China approved the first license for drones to drop off products.

The license went to logistics giant SF Express Co. It’s a milestone in a country that is a global leader in drone manufacturing and use.

The Civil Aviation Administration (CAAC), the country’s civil aviation regulator, granted the license on Tuesday for pilot operations of drone deliveries to a Jiangxi-based subsidiary of SF Express.

The license means SF Express can officially launch commercial operations of drone delivery, said a person close to the company.

SF Express has been building a drone network since 2017. It has developed drone models that can carry goods weighing up to 25 kilograms (55 pounds) with a flight range of up to 100 kilometers (62 miles). Most of SF Express’ drone models are designed for delivery services to customers.

The company has said it is developing a logistics network that will have large drones for longer-range bulk deliveries between warehouses and small drones that fly directly to customers. Such a network would enable SF Express to send parcels to every corner of the country within 36 hours.

But SF Express is still facing regulatory hurdles to operate large drones for delivery as they don’t fit into existing aircraft categories in the regulator’s current airworthiness certification system for heavier vehicles. Xu Chaoqun, director of the Aircraft Airworthiness Certification Department of CAAC, told Caixin that the civil aviation regulator currently requires drones weighing more than 25 kilograms to obtain airworthiness approval as general transport aircrafts. That usually takes about five years. No specific rules regarding airworthiness for drones have been issued.

Li has called for different rules to be designed for drones.

China hasn’t yet issued specific laws regarding the operation of drones. It currently follows terms set for the general aviation sector under the Civil Aviation Law. The State Council is drafting national rules for drone operations, which are expected to be released later this year.

In addition to SF Express, China’s second-largest e-commerce operator JD.com has also launched a pilot program for drone delivery after receiving airspace approval in the central Shaanxi province in August.