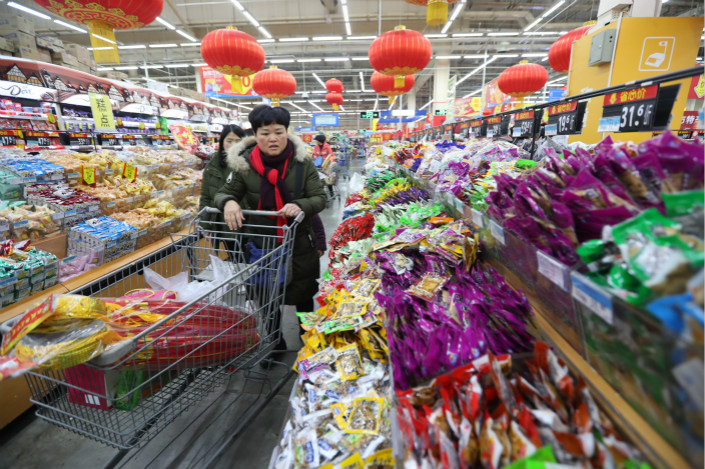 Chinese shoppers stock up on snacks in Walmart ahead of the annual Lunar New Year holiday in Kunming, Yunnan province on Feb. 8. Photo: VCG

Walmart’s emissions reduction program for China accounts for 5% of the company’s plan to reduce emissions in its global value chain by 1 billion metric tons by 2030. That figure is equal to the emissions released by more than 211 million passenger vehicles in a year on average, according to a company statement.

More than 400 suppliers in China, India, the U.S. and elsewhere have joined the project, according to Walmart. The program in China will start with 100 major suppliers.

“We believe that business can accelerate environmental progress while delivering economic growth. That’s why we’re committed to taking a shared value approach to our work in China and around the world,” Walmart President and CEO Doug McMillon said in the statement.

The company has also created a digital bilingual resource center to help with case studies and setting targets.

At the same time, China may end up shouldering greater global responsibilities on environmental issues, after U.S. President Donald Trump decided in June to withdraw from the Paris climate accords.