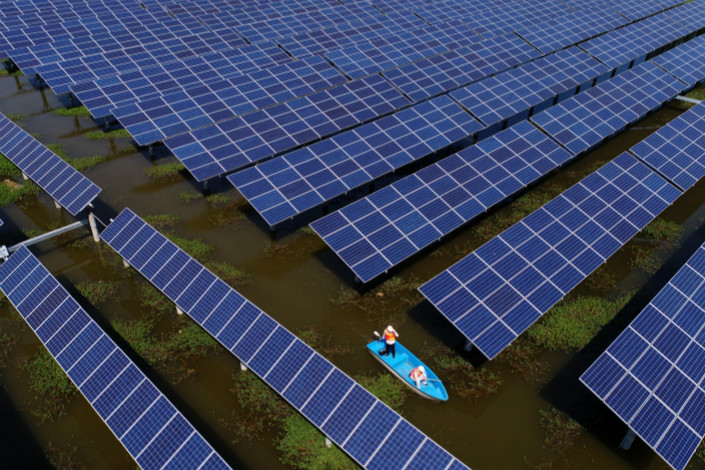 Solar panels are seen in a solar-energy farm in Jiangling county in Jingzhou, Hubei province, on Sept. 15. Photo: VCG

GCL System Integration Technology Co. Ltd. will own 40% of the joint venture, which will make and sell photovoltaic ingots, wafers, batteries and modules, according to an announcement from the pair on Monday. Softbank will hold the remaining 60%, with the entire project involving investment of up to $930 million.

The plant will have the capacity to make products with up to 4 gigawatts (GW) of annual capacity, with construction divided into two phases of 2 GW each, according to the announcement. It will be based in the state of Andhra Pradesh in India’s southeast.

Formation of the joint venture was outlined in a newly signed memorandum of understanding between the pair, with a final agreement yet to be reached. Investors for the project also have yet to be identified, the two sides said.

“In the first potential project for this partnership, the two parties will leverage their strengths as leaders in the following areas: GCL will be responsible for keeping down production costs and providing support for the joint venture’s production and new product development,” GCL’s Shenzhen-listed unit said in a statement. “Softbank will help the joint venture secure land and necessary approvals, and will communicate with the Indian central and state governments about subsidies and other preferential treatment.”

Similar to China, India has embarked on an ambitious program to build up the country’s renewable-energy generation capability in an effort to clean up the country’s air and also encourage development of new technologies. The country has set a goal of installing 175 GW of renewable energy capacity by 2022, with about 100 GW coming from solar. By comparison, the U.S. had just over 50 GW of solar power capacity by the end of last year.

GCL’s decision also comes as Chinese panel makers face growing pressure overseas from governments that accuse the group of receiving unfair assistance such as state-subsidized land and loans that put their own domestic firms at a disadvantage. China now supplies about half of the world’s panels following a rapid buildup over the last decade after Beijing earmarked the industry for development.

The U.S. and European Union both previously conducted investigations that found Chinese companies received such illegal subsidies, and have taken actions to limit the impact. India is also taking similar steps, and is moving closer to steps that could see it impose punitive tariffs for imported Chinese panels.