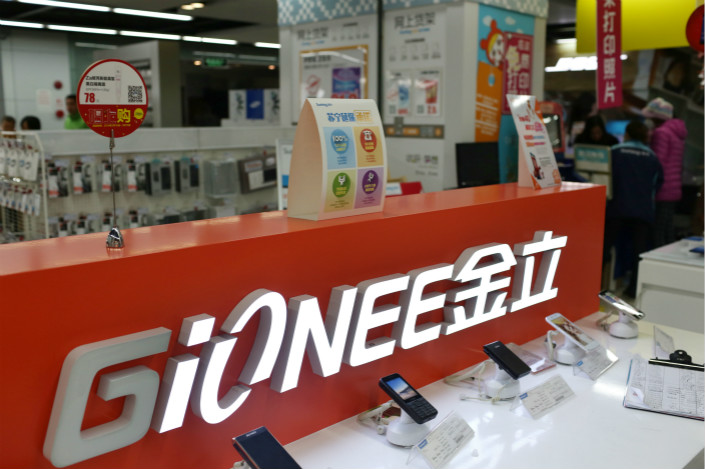 Gionee smartphones are displayed at a home appliance store in Shanghai in February 2017. Photo: IC

Gionee Vice President Yu Lei admitted on social media over the weekend that the company owes money to some media outlets as a consequence of its overall marketing activities and a “sudden cash crunch.”

But reports that Gionee spent huge amounts of cash on stars are “groundless,” he wrote.

Yu said that the company’s total marketing expenses include not only endorsements and advertisements, but also areas such as showrooms, promotional activities and subsidy deals with mobile carriers that go beyond the Chinese market.

“Please allow us some time and we will pay all our debts to our suppliers and media partners,” Yu wrote. “We have overcome many crises in the past and we are trying our best to resolve the current predicament.”

His remarks came a few days after Gionee announced it is laying off half of its workforce at a plant able to produce 80 million handsets a year in Dongguan, Guangdong province.

“To ensure business as usual at the plant, we have retained around 50% of workers. We also are also engaging with external companies to help make handsets to cope with our local and overseas orders,” the statement said.

According to research firm IDC, Gionee saw its worldwide market share drop to 1.5% in the fourth quarter of last year, versus 2.4% the same period a year ago. It was the No. 6 brand in China in the last quarter of 2017, with a 4.8% share, down from 6.6% a year earlier.

Despite attempts to shore up brand awareness in overseas markets such as India, Gionee is highly dependent on its home market as it “got 91% of its sales from China” in the fourth quarter of last year, an IDC analyst told Caixin.

Chinese demand for handsets continues to slow due to saturation.

According to the latest data from the China Academy of Information and Communications Technology, total handset shipments for China during the three months ending March slumped 26.1% year-on-year to 87.4 million units. A total of 206 models were launched, 8.4% fewer than in the same period last year.