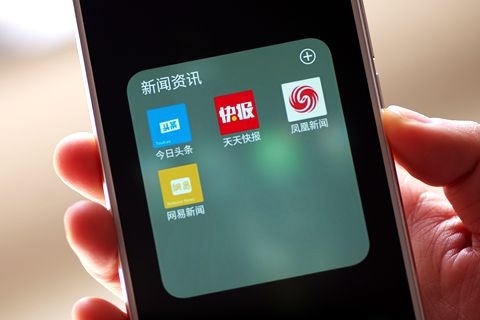 Four popular news apps (above) have been ordered to be taken from major app stores. Photo: VCG

Since Monday afternoon, the mobile app of Toutiao, along with smaller rivals Tiantian Kuaibao, Netease News and Ifeng News, have no longer been available on several app stores for Android users, including the ones operated by leading smartphone makers Huawei Technologies Co. and Xiaomi Inc.

App stores were ordered by regulators to remove the four apps by 3:00 p.m. on Monday Beijing Time for periods between three days and three weeks, as part of the effort to “regulate the broadcasting market,” domestic media reported.

Toutiao, China’s largest news aggregator with over 95 million daily active users, will be suspended for download for three weeks, according to the reports.

Netease News had 24.5 million daily active users in March, while Tiantian Kuaibao and Ifeng News had 16.5 million and 10.5 million, respectively, according to market information provider QuestMobile.

Huawei confirmed with Caixin that it has received the order to remove the apps from its store. The apps were still available on Apple’s China app store as of the time of publication.

Toutiao operates three video-streaming platforms allowing users to upload and share video clips — Douyin, Huoshan and Xigua — as the news aggregator seeks to expand its business into the emerging sector.

China’s video-streaming industry generated 5.7 billion yuan ($904 million) in revenue last year, and this figure is expected to rise to 36 billion yuan over the next three years, according to industry consultancy iResearch.

The SART said in an April 4 statement that it had demanded that Toutiao and Kuaishou clean up content deemed “vulgar, violent, obscene and harmful,” and suspend registration of new users while carrying out inspection on existing users.

The companies were also ordered to reduce the amount of content uploaded on their platforms and to review all broadcast material.

Toutiao said it has removed 10,318 video clips from its video-streaming platforms and banned 4,864 user accounts. Kuaishou said it will expand its content reviewing team from 2,000 to 5,000, and change its algorithms so that they only recommend content that is “in keeping with the country’s laws and regulations, and with social norms.”

Chinese regulators have toughened oversight of internet content. This partly reflects an expanding reach from politically sensitive content to pop-culture entertainment after the installation of China’s latest cybersecurity law in June.

In late March, the media watchdog banned online parodies and adaptations that are based on copyrighted content, a rising business model of many video-streaming sites. In January, Twitter-like social media platform Weibo was asked to temporarily suspend part of its services, most notably for its search-ranking and trending functions, after being criticized for spreading what authorities called “obscene and wrongly oriented content.”